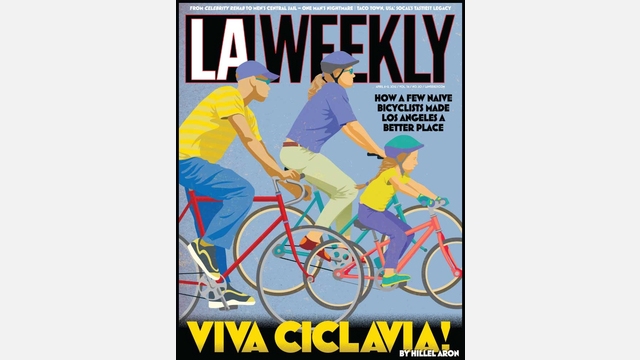 The latest issue of the L.A. Weekly - April 6-12 2012 - has a cover story all about how CicLAvia got rolling and what to expect. It's titled Viva CicLAvia and it's by Hillel Aron.

Here's an excerpt about the various folks who first made CicLAvia happen:

As if casting for some kind of prisoner-of-war escape film, the group's initial members each had the exact higher-order specialties you would need to produce an impossible-sounding seven-mile, open-air, closed-streets, public event in Los Angeles.

“It was a combination of our different assets that made this happen so quickly and so well,” [CicLAvia producer - Aaron] Paley says. “We all had different things to bring to the table.”

Paley had hosted public events that drew hundreds of thousands of people. [Stephen] Villavaso, a traffic-engineering expert, knew all about shutting down streets and mitigating traffic. [Jonathan] Parfrey, the DWP commissioner/environmentalist, had important contacts with nonprofit groups and City Hall. Colleen Corcoran and Joseph Pritchard knew how to design hipster-friendly branding and brochures. Joe Linton, bicycling advocate and resident of Eco Village, was a tireless, experienced organizer.

But it's unlikely the event ever would have gotten off the ground if not for Mayor Villaraigosa.

"The city felt intimate in a way I wasn't expecting," Paley says. "Everybody felt that. That was revelatory."

Parfrey recalls seeing a man from Corona, deep in the Inland Empire, his arms covered with tattoos, with his 4-year-old daughter. She was riding a tiny bicycle.

"It's just so great to bring my daughter here and show her the city," the man told Parfrey. "I love L.A."

"So few times do you actually have access to the street," Parfrey says. "And that is your street, and that is your time — you own that street. And that day, you did."

For the full story go to the L.A. Weekly website - or pick up a copy around town!

News
Do you like this post?
CicLAvia Stories
CivSalons with AARP Los Angeles
In South LA, a View to the Future
Local Gems: Enjoy South LA
CicLAvia Store