Local Gems: Explore this Rich Menu of Gems Along Our August 18 Route 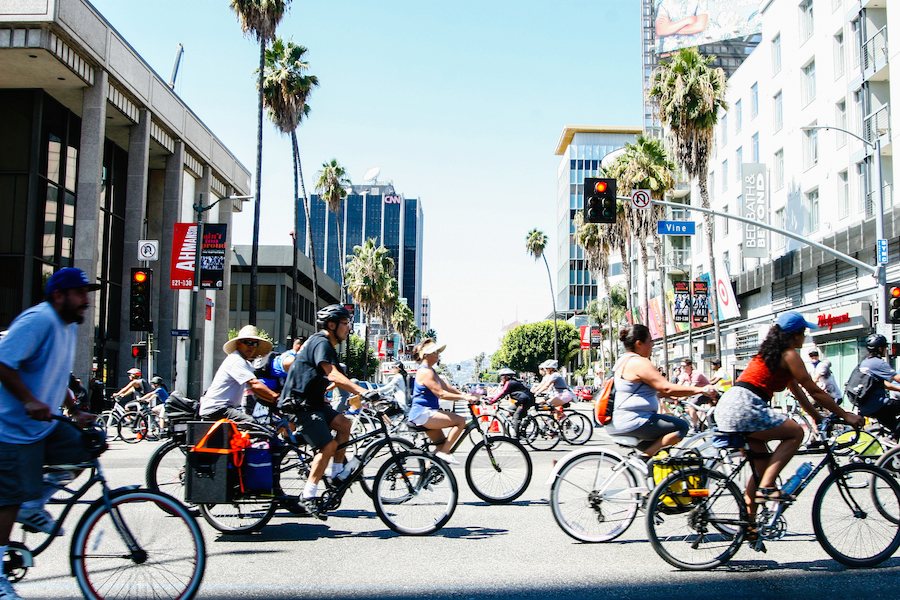 From iconic restaurants and bars to landmark architecture and cultural sites, both world-famous and tucked-away gems pepper Santa Monica Blvd, Highland Ave and Hollywood Blvd. As you slow-roll your way through the route, look out for these local treasures.

Barnsdall Art Park is a prominent cultural and recreational area in Little Armenia. Owned by the Los Angeles Department of Cultural Affairs, the park is home to the Hollyhock House (more below) and the Los Angeles Municipal Art Gallery, and Barnsdall Gallery Theatre for live performances.

The Dolby (formerly Kodak) Theatre, located within the Hollywood and Highland Center, is world-renowned for hosting the Academy Awards as well as blockbuster premieres, concerts and other events since its opening in 2001.

Built in 1929 and designated as a landmark by the City of West Hollywood, El Mirador is a residential apartment building that boasts famed former tenants such as Jean Harlow and Conrad Hall. The ornately detailed building is attention-grabbing with its white Spanish Revival facade.

Since 1991, the Guinness World Records Museum Hollywood has been drawing people in to explore incredible human feats curated from its namesake book of world records.

Originally designed and built as a private home for oil heiress Aline Barnsdall by legendary architect Frank Lloyd Wright, the Hollyhock House is celebrated for its influence on residential architecture. At nearly 100 years old (completed in 1921), Hollyhock was recently designated a UNESCO World Heritage site.

Towering over Hollywood Blvd and Highland Ave with Art Deco-Gothic design since 1928, the Hollywood First National Building was designed by Meyer and Holler who envisioned a spire shooting to the heavens. The architects also designed Grauman’s Egyptian Theatre and Grauman’s Chinese Theatre.

Formerly known as the Hollywood Hospital, the original building of the Hollywood Presbyterian Medical Center opened its doors to the public in 1924. In addition to being a landmark for its classic aesthetics that survive today, the hospital reportedly treated Marilyn Monroe, Elvis Presley, and Lucille Ball when she gave birth to Desi Arnaz, Jr.

The Hollywood Walk of Fame

Synonymous with Hollywood Blvd, the nearly 60-year-old Walk of Fame is one of the most famous sidewalks in the world. Over 2,600 bronze and gold inlaid stars memorialize television, radio, motion-picture, recording, and live-performance entertainers.

Designated a Historic-Cultural Monument in 1988 by the City of Los Angeles and listed on the National Register of Historic Places, the Art Deco Hollywood & Western Building (also known as the Mayer Building and the Hollywood Western) is occupied by several office suites today. Completed in 1928, it was originally built for the Motion Picture Association of America, and it was the original location of Central Casting.

As a prominent station along Metro Los Angeles’ Red Line, the Hollywood / Vine station is arguably filled with the most artwork of any Metro rail station. Designed by local Los Angeles Chicano artist Gilbert Luján (aka Magu), the design is inspired by SoCal cultural motifs including a ceiling covered with empty film reels, and benches for waiting passengers fashioned as classic car lowriders on pedestals. Metro offers free art tours on a weekly basis.

A series of similarly designed houses clustered around the route make up the Old Sherman Thematic Grouping, and are among the oldest residences in West Hollywood. Dating as far back as 1899 when West Hollywood was known as Sherman, the modest homes reflect the architecture familiar to the Midwestern emigrants coming to California in that era and signal West Hollywood’s birth as a distinctive city. The City of West Hollywood designated the houses a Cultural Resource in 1999.

Just off the route is an eye-catching multicolor collection of structures that is home to the Pacific Design Center. The huge, state-of-the-art campus, completed in 1975, houses residential and office design brands, and hosts screenings, exhibitions, conventions, and more.

Lining the western edge of West Hollywood’s Plummer Park is a group of charming residential buildings known as the Plummer Park Apartment Grouping, which the City of West Hollywood designated as a Cultural Resource in 1991. Constructed in 1927 in the Spanish Revival style, the apartments share an austere yet elegant appeal including weathered brick, wood balconies and clay tile roofs.

Built in 1938 to improve access to green space during the Great Depression, Plummer Park and its Great Hall/ Long Hall — the only structure in West Hollywood to be constructed through the New Deal — have long been a popular local recreational area and gathering place. In the 1980s and 1990s, it became a central meeting and rally site for LGBTQ activists urging the Federal government to do more to address the HIV/AIDS epidemic.

Made permanent in 2012, the crosswalks at San Vicente Blvd and Santa Monica Blvd in West Hollywood are painted with rainbow stripes symbolizing LGBTQ pride. They have quickly become a landmark not only because of their standout quality but also for being an ode to the city’s inclusive spirit.

Ripley’s Believe it or Not! Hollywood

What started as a comic strip series by traveler and collector Robert Ripley, spawned into radio and television programs and eventually this world-famous Ripley’s Believe it or Not! location on Highland Ave and Hollywood Blvd. The museum features a curation of over 300 exhibits and galleries of strange and kitchty things.

Since 1927, this luxury hotel has occupied a place in Hollywood lore. The Roosevelt Hotel, named for President Theodore Roosevelt, has welcomed countless celebrities including regular guest Marilyn Monroe and played host to the first Academy Awards ceremony. It was named a Los Angeles Historic-Cultural Monument in 1991.

Tucked away about a block from the route is the Schindler House, considered the first modern-design home in the region. Built in 1922, the design, blending industrial materials and an open floor plan, was a radical approach for a residential structure for that era. Today, it is home to the MAK Center for Art and Architecture, so you can explore the house and more Wednesdays through Sundays from 11am–6pm.

Situated at the Western edge of Los Angeles’ Thai Town neighborhood is the Thai Town Apsonsi Gateway featuring two gold statuettes of mythical half-human-half-lion angels flanking both sides of Hollywood Blvd. The larger-than-life figures welcome travelers to the world’s first and only Thai Town and are said to bring good fortune.

Opened in 1924 as Hollywood’s first high-rise, the Taft Building is designated as a Los Angeles Historic-Cultural Monument and currently blends twelve stories of modern office space with its classic facade. The building boasts former tenants such as Charlie Chaplin, Will Rogers and the Academy of Motion Pictures Arts and Sciences.

Completed in 1962, the historic building underwent renovations in 1995 to give West Hollywood’s City Hall its modern flare. West Hollywood City Hall has the first municipal fully automated parking garage built on the West Coast, where robotics transport vehicles to an available space.

About a block from the route sits the West Hollywood Public Library, a large, ultra-modern edifice that invites residents and visitors to explore, learn and create in a space that resembles a contemporary art museum. It’s more than just a library building: it features a state-of-the-art children’s theatre, the City of West Hollywood City Council Chambers, a bookstore, and a lovely cafe.

What started as a modest chili shack in 1927 along Route 66 (now Santa Monica Blvd), has evolved into a favorite gastropub, with other locations across the region. This West Hollywood location became a hub for the counterculture revolution as a popular hangout for the LGBTQ community and famed musicians Janis Joplin, Jim Morrison and others.

Boardners has been serving up cocktails since 1927 (then called My Blue Heaven), a few years before Prohibition. Once serving libations became illegal, Boardners reportedly masqueraded as a hair salon — like any respected watering hole of that time.

Long a hangout of entertainment industry glitterati, this West Hollywood restaurant and bar first opened in 1925, operating out of a red trolley car. Today, it’s been renovated to include classic Chinese decor as a nod to the Cantonese cuisine it was well known for and a trolley car in celebration of its origins.

Famous in part for its singing waiters and waitresses, this classic Italian restaurant and bar comes complete with old-world charm and history dating back to 1949.

With its opulent exterior, the Chinese Theatre is an unmistakable presence along Hollywood Blvd. Built in 1927, during the Gilded Age of Hollywood, it was declared a Historic-Cultural Monument in 1968.

One of Sid Grauman’s other premiere theatres along Hollywood Blvd, Grauman’s Egyptian Theatre has been famous the world-over since nearly the day it opened in 1922. Today, it’s home to American Cinematheque, a non-profit theater group, which offers screenings of independent, classic and world films.

In 1926, developer C. E. Toberman — dubbed “The Father of Hollywood” — opened the El Capitan as one of his four marquee theatres. Walt Disney Studios bought the theatre in 1988 and restored the exterior to its former glory.

Bearing the surname of its original owner, Alexander Pantages, the Pantages Theatre first opened in 1930 and is an exemplar of palatial Art Deco design. It continues to attract visitors from near and far to its live-performance shows.

Created in 1990 as an homage to Hollywood’s first Latina movie star, this mural at the corner of Hudson Ave and Hollywood Blvd bears the image of Dolores Del Rio and pays tribute to her career, which spanned the 1920s and 1930s.

Occupying the entire side of a wine and spirits store since 2015, the Instagram favorite “Dream Big” mural by Marisabel Bazan features scores of large and small butterflies in a wide array of colors.

Three ground-to-top-floor murals adorn the West Hollywood City Library parking garage. The artwork was commissioned as part of a joint project between the Museum of Contemporary Art (MOCA) and the City of West Hollywood.

You Are the Star

The “You Are the Star” mural has been a favorite along Hollywood Blvd since it was completed in 1983. The mural paints a tableau of various legendary stars such as Marilyn Monroe, James Dean, Charlie Chaplin, and Lucille Ball, among others, sitting together in a movie theater, facing the screen — watching you.

We hope you can join us as we explore West Hollywood, Hollywood, East Hollywood, Thai Town, and Little Armenia during CicLAvia—Meet the Hollywoods on August 18! To learn more about the route, check out our Interactive Digital Map.