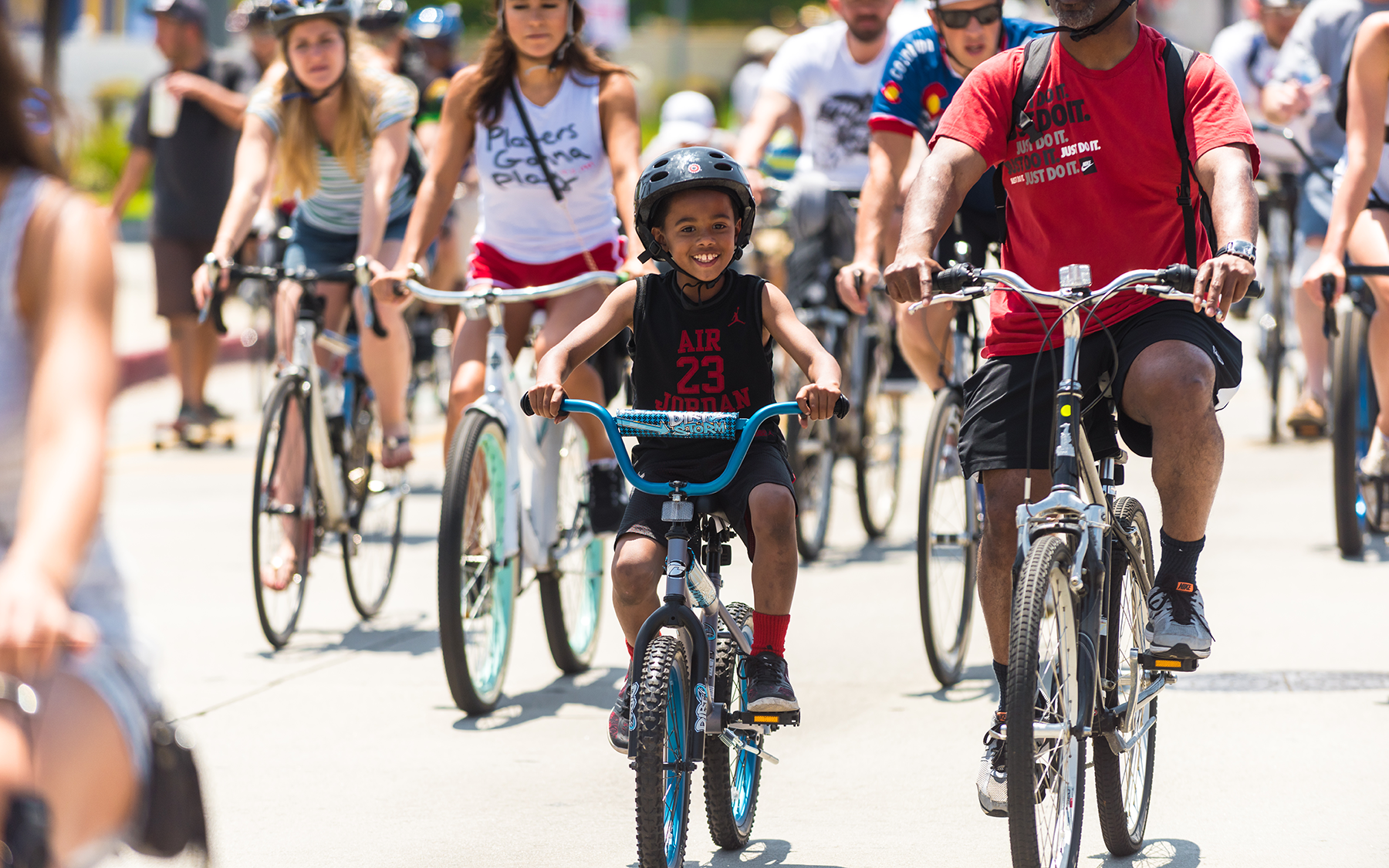 Public parks, iconic buildings, street art, and hidden bike routes thrive in the open space of the San Fernando Valley, and many are accessible from the CicLAvia—The Valley route. Neighborhood locals and visitors to Canoga Park, Winnetka, and Reseda may find something new in the area.

The Madrid Theater, located a few blocks east of the Canoga Park Hub (between Owensmouth and Remmit), is a state-of-the-art performance facility for professional, community and student productions; an expansive exhibit space for visual artists; and an arena for Madrid Theatre productions. It’s a great cultural centerpiece for Canoga Park - and it’s undergoing a major rennovation to cement its status as a cultural center in the Valley.

Surrounding the theater is Antique Row, a series of brick buildings from the 1920s and 1930s (that survived the Northridge earthquake) that is a destination spot for rare antiques. 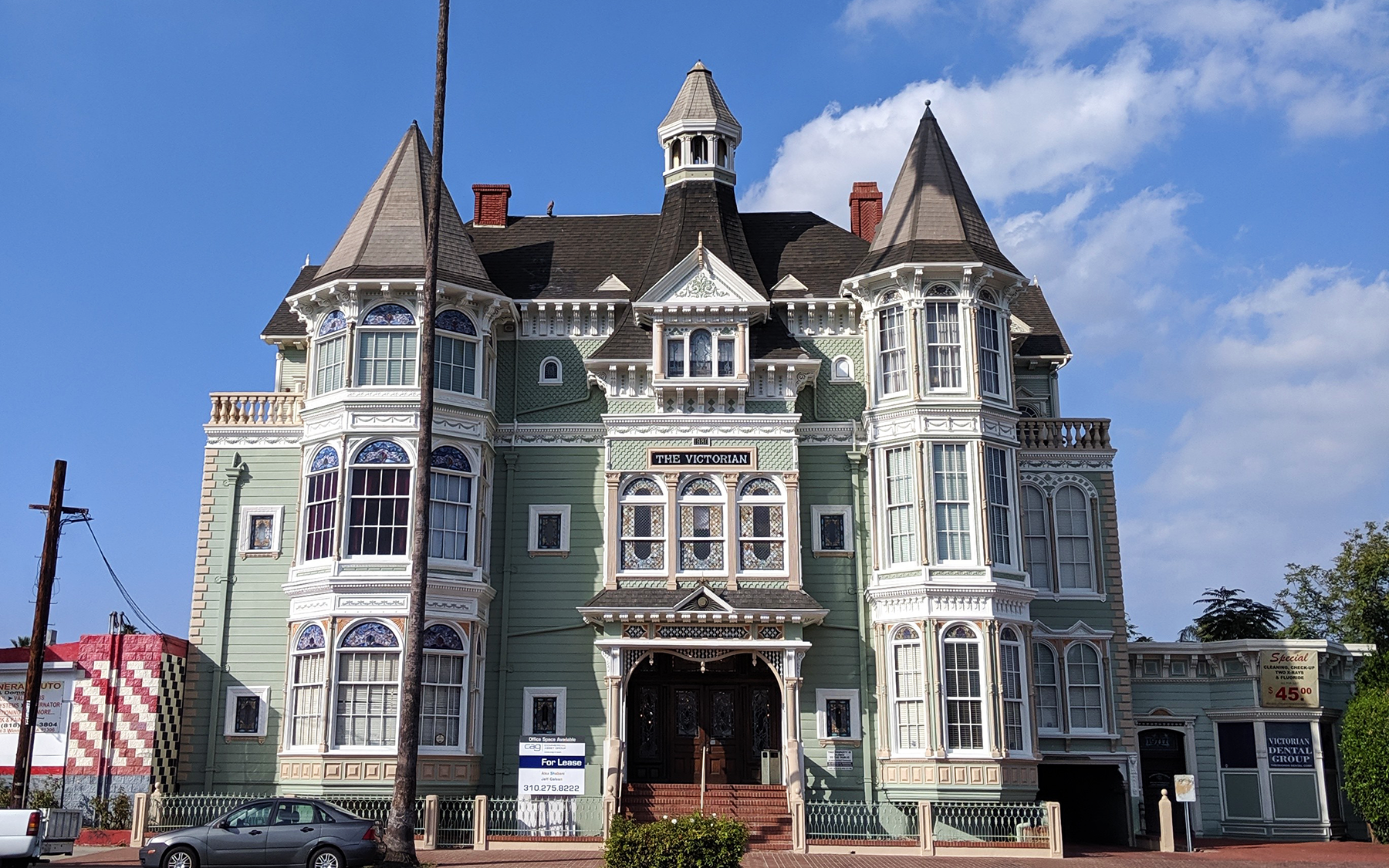 Near the Winnetka Hub is a Valley oddity: The Victorian, a 75-foot tall Queen Anne-style building that was painstakingly constructed out of salvaged pieces (windows, staircases, balustrades) of similar buildings in Bunker Hill.

At the other end of the route, near the Reseda Hub, is the Reseda Theater - a subject of redevelopment (known as Reseda Rising) to maintain the iconic theater marquee and revitalize its role in the commercial district.

Off the route, there are a few destinations any visitors to the Valley should make. The Valley Relics Museum (open Sundays 11 am - 3 pm), is a large space – it occupies two entire airplane hangars at Van Nuys Airport – sporting tens of thousands of vintage signs, costumes, vehicles, and other memorabilia from the San Fernando Valley.

The Aerojet Rocketdyne building is home to incredible achievements in rocket science, as well as some creative outdoor art.

A Wide Array of Cuisines

The Valley is full of restaurants and food stops across the cultural spectrum. The health-conscious may appreciate that two LA-famous restaurants, Vinh Loi Tofu, which offers a Vietnamese vegan menu, and Follow Your Heart, offering country-style vegetarian fare, both make their home along Sherman Way.

Varied cuisine from Carillo’s Mexican Deli, India’s Sweets and Spices, and Cavaretta’s Deli are also along the CicLAvia route.

Food trucks will be lined up at the Winnetka Hub as well, so work up a hunger before you get there.

There are several opportunities to extend CicLAvia into a full day of car-free travel, by merging our route with nearby bike paths and parks. 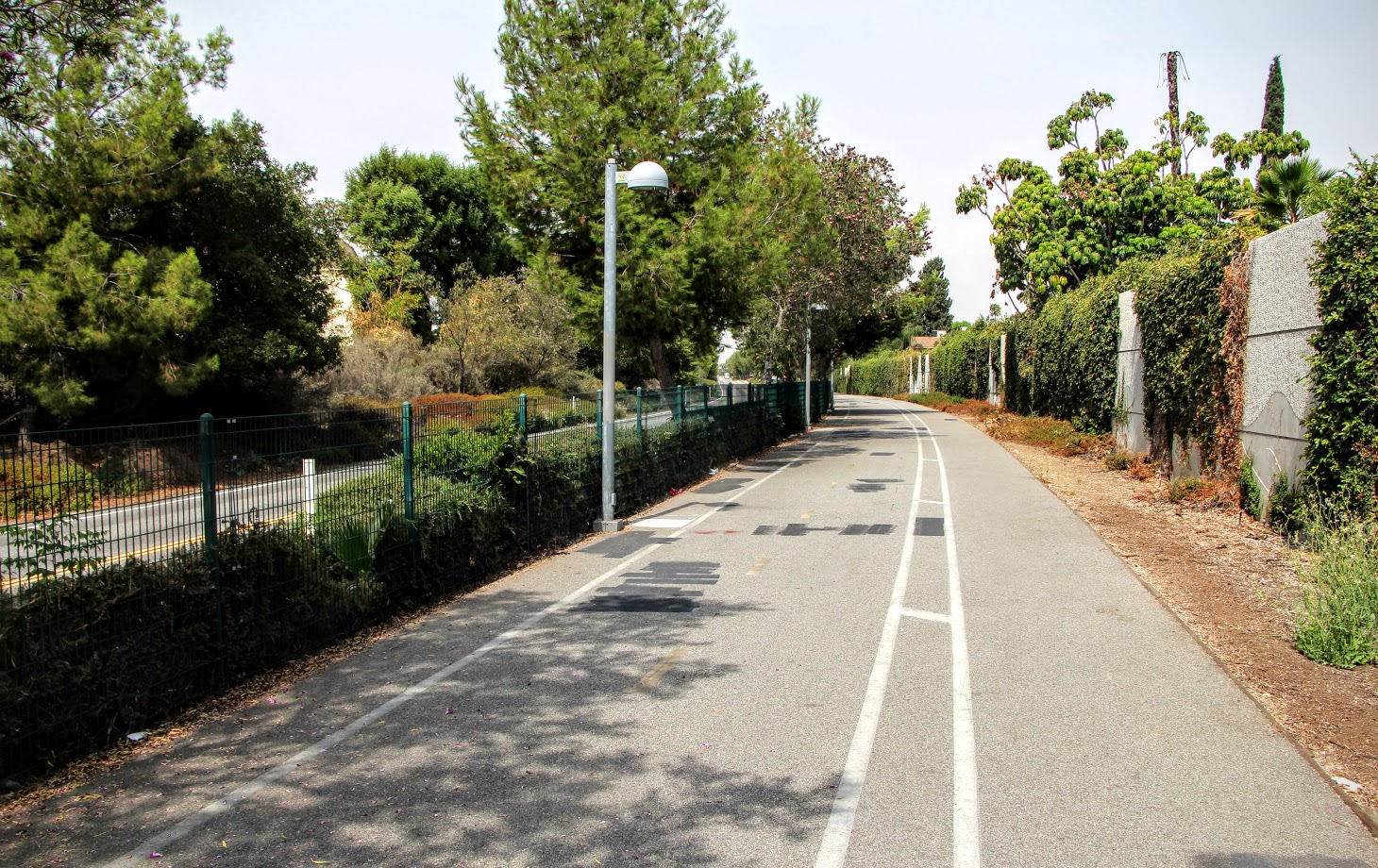 Starting (or ending) on the Orange Line Bikeway gives cyclists roughly an additional 15 miles of protected riding with hidden LA scenery, including leafy canopies and artists’ murals. (Going round trip and it’s 30!) This bike route runs along the Metro Orange Line and provides a traffic-free means of traversing the heart of the San Fernando Valley.

The bikeway also connects cyclists to the Sepulveda Basin Recreation Area – 2,000 acres of public parks and sports facilities, and home to dozens of Valley sights. The Sepulveda Dam, built in 1941, sits at the edge of the basin (at what was, at the time, the end of Los Angeles city limits) and near the Wildlife Preserve, replete with nature paths and hiking trails.

Lake Balboa Park comprises 80 acres at the center of the basin, offering boat rides and fishing. 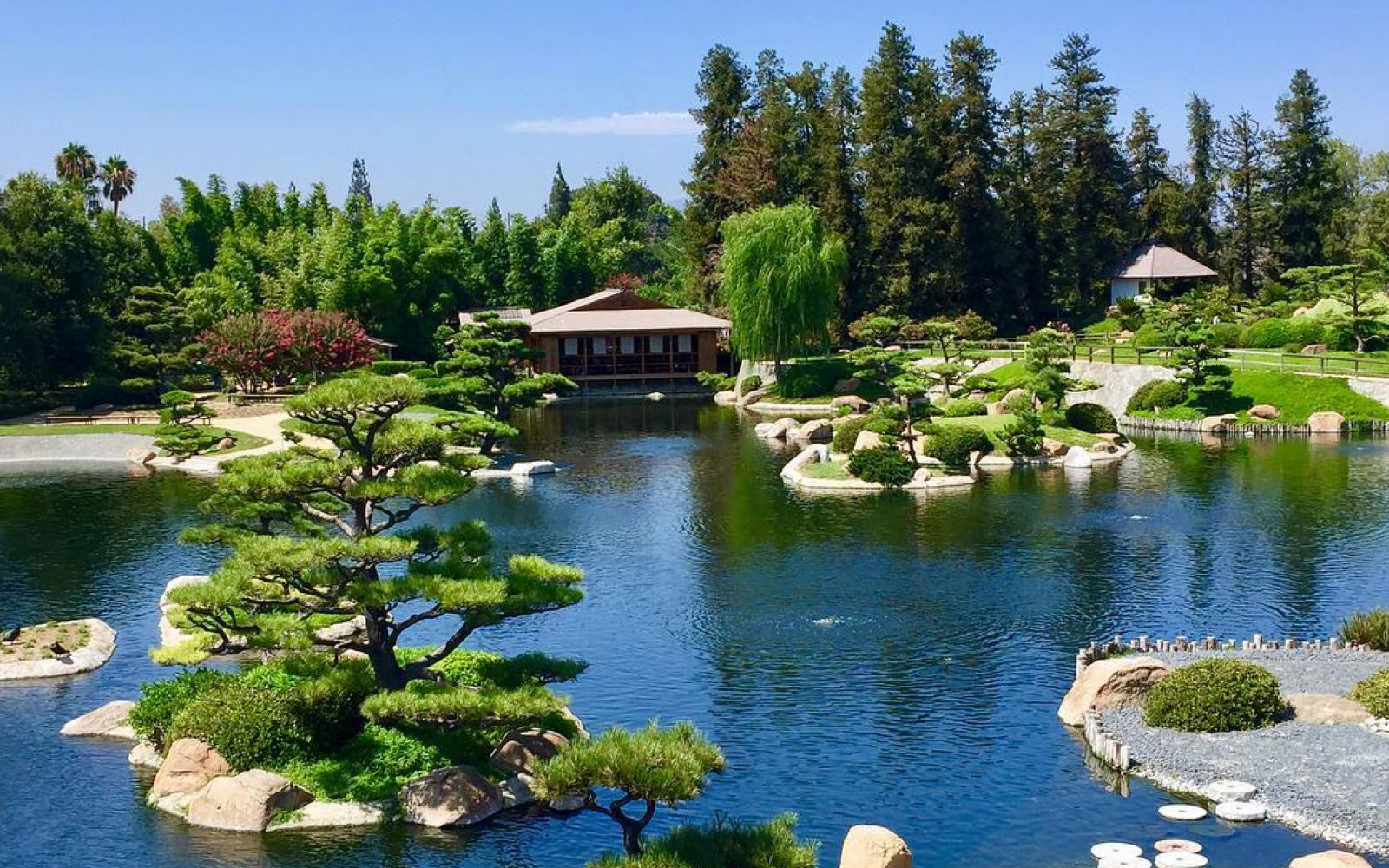 In the northeast corner of the Basin lies the Japanese Garden (open Sundays from 10 am to 4 pm, though check details on their site); it’s known as a “garden of water and fragrance,” and was ranked the 10th best Japanese Garden in the US (out of 300 total) by the Journal of Japanese Gardening. If the route hasn’t tired you out, you can find sporting activities around the rest of the park from archery and golf to batting cages and basketball.

Just a few blocks south of Sherman Way is the Los Angeles River and the Greenway Path that runs alongside it. The river, too, is being revitalized by city and nonprofit groups, and is home to over 200 bird species and a diversity of wildlife. It’s something many Angelenos miss when driving past it - but Sunday will be a great opportunity to take a closer look. 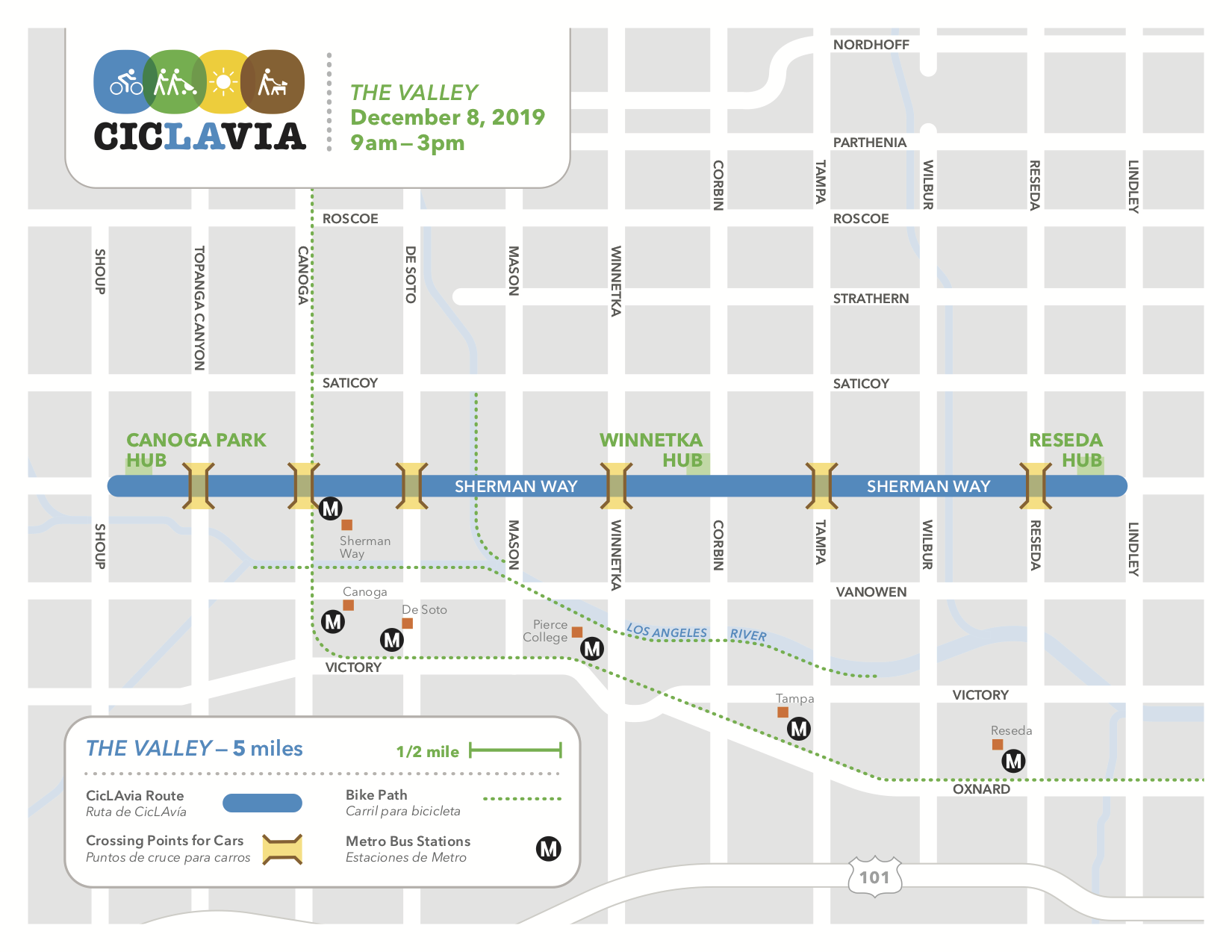 About 30% of attendees at the average CicLAvia event are newcomers – so this is a great time to finally discover why everyone loves these events. And if you’ve been joining for years, bring a friend or coworker who has never been! We’ll see you in the Valley on December 8.