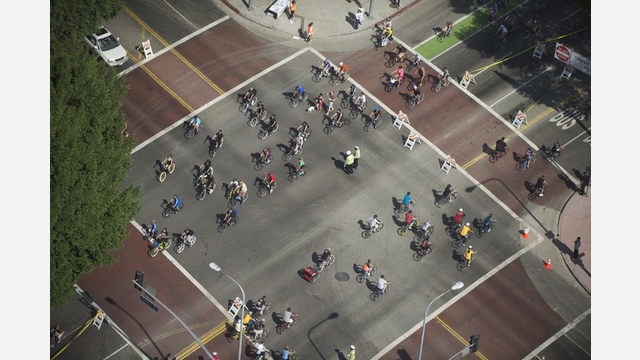 CicLAvia – To the Sea  (April 21st, 2013) Sun, surf, and 15 miles of open road will mark the first CicLAvia of 2013, transforming Venice Boulevard and downtown Los Angeles streets into a car-free, linear park for strolling, biking, playing, and exploring the city from a new perspective. Since it began in 2010, CicLAvia has quickly become Los Angeles County’s most popular public event, consistently attracting more than 100,000 participants. CicLAvia is free of charge and open to everyone, from lifelong Angelenos to first-time visitors from around the globe. Leave the motorized transportation methods behind and claim the streets as your own.

CicLAvia – Iconic Wilshire Boulevard  (June 23rd, 2013) Wilshire Boulevard was first carved out as a long path through a barley field in 1895. While its beginnings were humble, this path has transformed into one of the most notable boulevards in all of the United States. On June 23rd, starting at One Wilshire in Downtown Los Angeles and ending at Fairfax along Museum Row, the CicLAvia – Iconic Wilshire Boulevard route will take participants through a snapshot of the city’s architectural evolution from Victorian vision to modernist experimentation; massive towers of business to intimate houses of worship; world class museums to working class mercados.

CicLAvia – Iconic Wilshire Boulevard is part of Pacific Standard Time Presents: Modern Architecture in L.A. This collaboration, initiated by the Getty, brings together several local arts institutions for a wide-ranging look at the postwar built environment of the city as a whole, from its famous residential architecture to its vast freeway network, revealing the city’s development and ongoing impact in new ways. Major support for CicLAvia - Iconic Wilshire Boulevard has been provided by the Getty Foundation.

CicLAvia – Heart of LA (October 6th, 2013) CicLAvia - Heart of LA returns to the streets that started it all as we explore downtown Los Angeles on bike, foot, stroller and many more creative means of locomotion. The Heart of Los Angeles route follows in the footsteps of our first five events and helps Angelenos rediscover the origins of the City of Angels. Whether you’ve ridden these streets before or are new to CicLAvia, the Heart of LA route promises something new to discover.


About CicLAvia
CicLAvia is recognized as one of the city’s most innovative initiatives – a large-scale, public celebration that has come to symbolize Los Angeles’ civic, cultural, and environmental resurgence. CicLAvia challenges the stereotype of Los Angeles as a car-addicted, smog-choked megalopolis, and gives people a chance to enjoy the benefits of the city’s improved walkability, bikeability, public transit, and vibrant street life.

Since it began in 2010, CicLAvia has quickly become Los Angeles’ most popular public event, consistently attracting more than 100,000 participants. CicLAvia is free of charge and open to all. No reservations are required. For more information, or to download maps, please visit www.ciclavia.org. To keep up with the latest CicLAvia news, become a fan on Facebook or follow us on Twitter or click "join" on our website to receive our email newsletters. CicLAvia is being produced by Community Arts Resources (CARS).
Events
Do you like this post?
CicLAvia Stories
CivSalons with AARP Los Angeles
In South LA, a View to the Future
Local Gems: Enjoy South LA
CicLAvia Store