Five years ago this month CicLAvia held its first event on October 10, 2010. With no idea about how the public would respond to removing cars from the streets of central Los Angeles, a coalition of bicycle advocates, environmentalists, urban designers and public officials anxiously held their breath to see what would happen. As we head to our five year anniversary and our 15th event on October 18, we start a two-week countdown looking back at the route CicLAvia has taken to become a civic institution in Los Angeles and a national leader in the open streets movement: 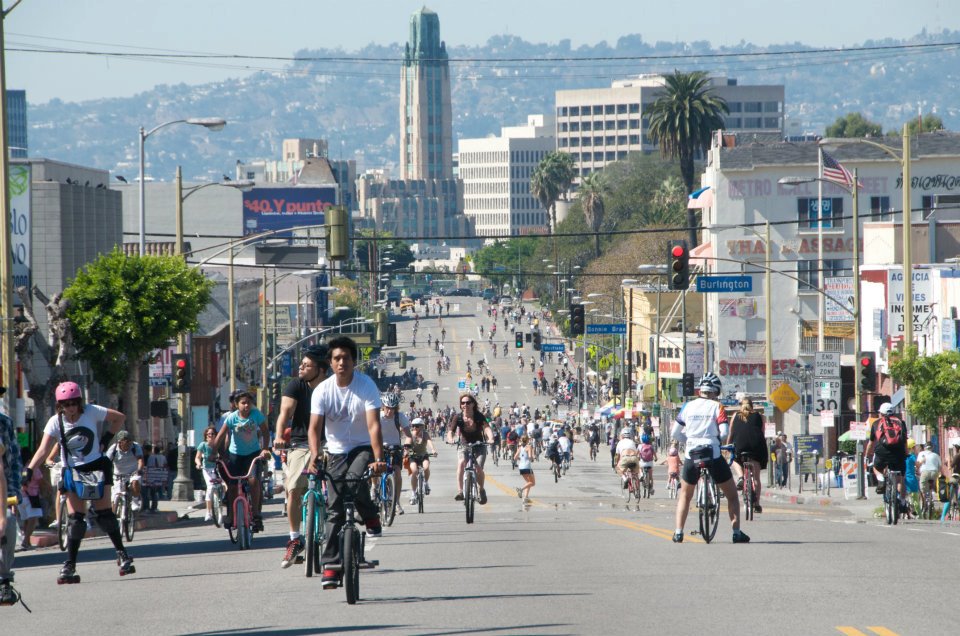 “On Sunday, October 10, 2010, I woke up feeling anxious after a fitful sleep and headed to the East Los Angeles neighborhood of Boyle Heights. In Hollenbeck Park, where the roar of an overhead interstate highway never fades, I joined a large group of people wearing t-shirts emblazoned with the word “CicLAvia.” I stood next to Antonio Villaraigosa, the mayor of Los Angeles, Jaime Ortíz Mariño, the founder of the ciclovía open street event in Bogotá, Colombia, and my fellow organizers as we took turns speaking to the media about what this day meant for L.A.

We would be closing 7.5 miles of central Los Angeles streets to cars to encourage city residents to walk and bike along a route that spanned from historically Chicano Boyle Heights, through Little Tokyo, into the central business district, beyond downtown into Central American MacArthur Park, and through Koreatown to the East Hollywood “bicycle district” that had grown around a bike repair collective, the Bicycle Kitchen. The organizing committee hoped that selecting a route through Los Angeles' most densely populated and diverse neighborhoods would be a clear statement that transport cycling there was possible. During the day, despite the worst fears of reluctant bureaucrats, we saw nothing but smiles on the faces of people who may have never cycled before on the streets of Los Angeles. An estimated 30,000 people came out that day and enjoyed their city streets. More events have followed, and with each iteration, CicLAvia has grown. The event now attracts over 100,000 participants and has expanded to connect more neighborhoods.” 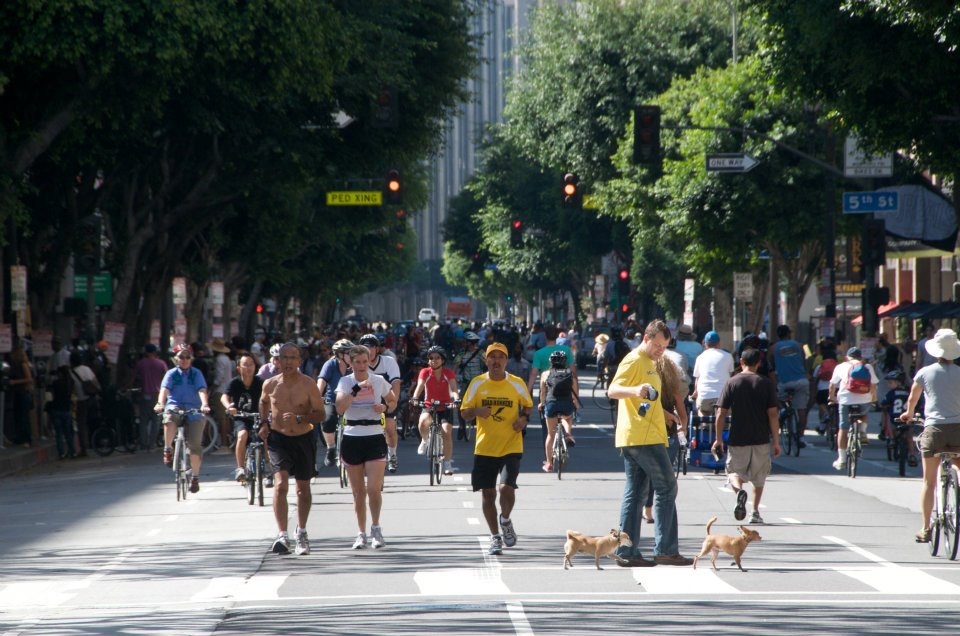 “For a few surreal hours Sunday, the car was stripped of its crown in Los Angeles and pavement was turned into playground…a moving crowd [of] bicyclists, runners, walkers, skateboarders and roller-bladers came out for the city's first CicLAvia — aimed at challenging widely held assumptions about how transit, exercise and the notion of public space play out in this auto-obsessed city.

Several people said the experience of gliding or strolling along streets empty of motor vehicles amounted to more than just a chance to get some exercise.

"We're alone in our cars. We pass above whole neighborhoods on freeways and never actually see them. Today, I've seen buildings I never took the time to lay eyes on before. Today gave people a chance to just slow down and it connected the neighborhoods of the city in a new way. That's important," said Rafael Navar, 32, who was taking a break on the 4th Street Bridge with his brother, sister-in-law and their three young kids.

People also talked with a sense of surprise that the city felt smaller and more manageable Sunday. Many said that, when they set out, they had expected the journey from East Hollywood to Boyle Heights would take far longer and be far more arduous than it was.

It was not lost on Cyndi Hubach, 49, and Kevin Mulcahy, 45, that the 45 minutes or so they took to cover the route may have been faster than what it would have taken in typical stop-and-go traffic. For them, and many others, that realization led to musings of what life could be like in Los Angeles — a city inhospitable to cyclists.

"Being able to ride freely and safely right through what you knew were usually really dangerous intersections, it got you thinking about what it could be like if the city created a network of dedicated bike routes. Getting from place to place would take on a whole new light," Mulcahy, an architect, said.”