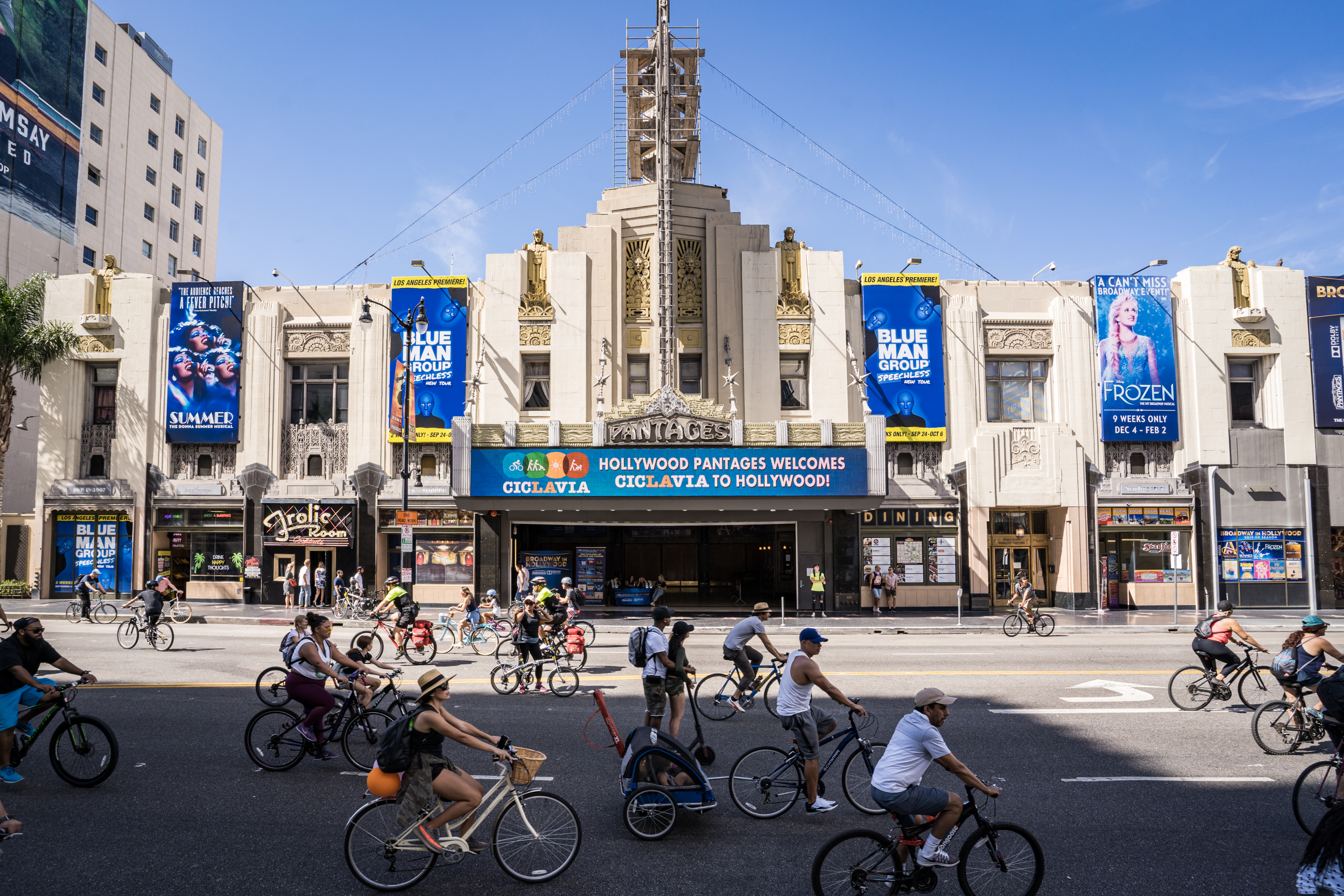 Across almost 7 miles of West Hollywood, Hollywood, and East Hollywood, there is a LOT to see and do both on and just off the CicLAvia route. Take a look at some of the highlights here, but it's far from an exhaustive list. One of the best parts of an open streets event is discovering the things you would never notice if you sped past in a car. From neighborhood restaurants and shops to murals and scenic views, there is so much you can see when you walk, or skate or bike, or pedicab ride along by it.

Explore the streets at your own pace and you'll likely stumble upon something new to you! 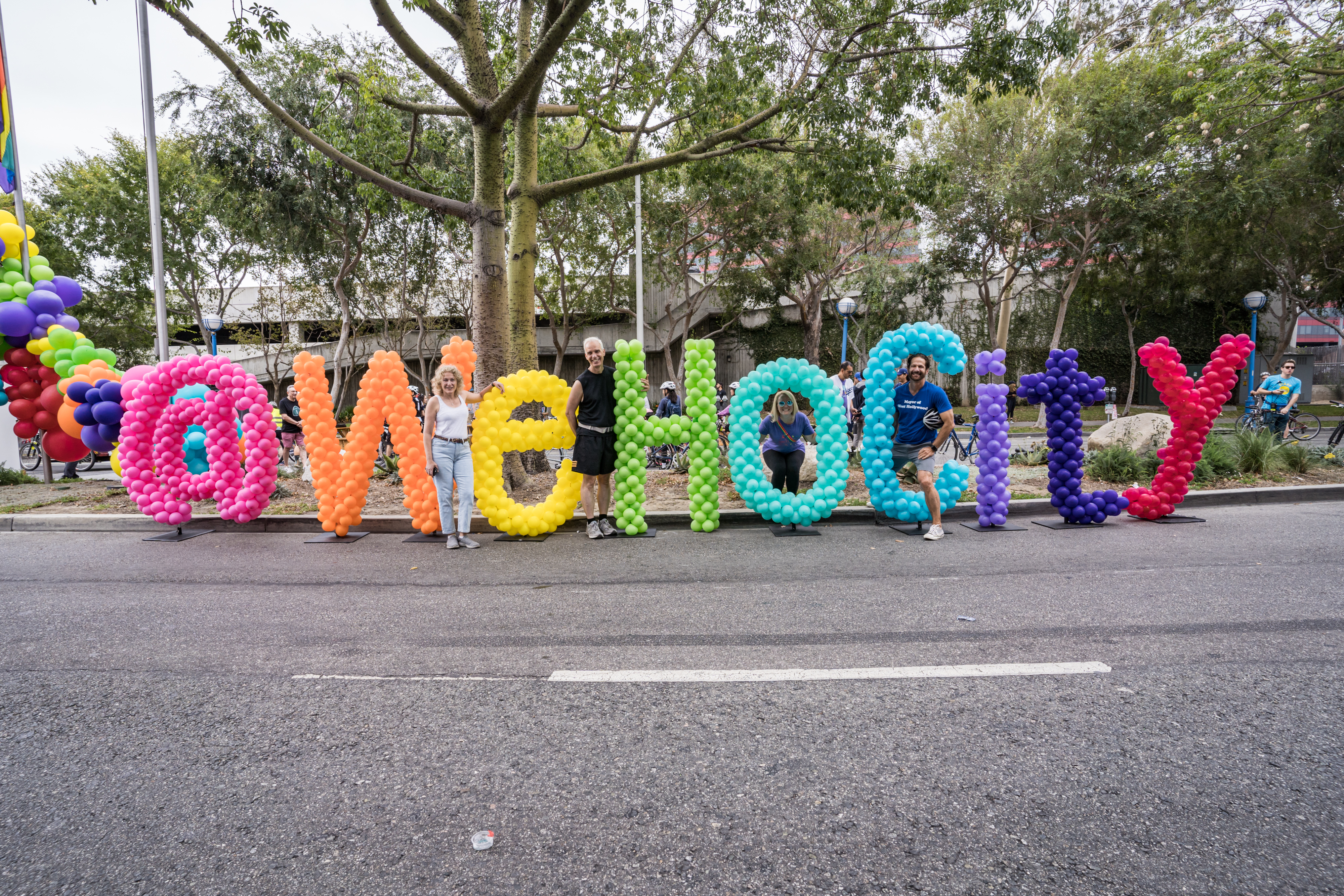 Dozens of works of public art line the streets, showing off beautiful iconography, political advocacy, history, and culture – from some small enough to fit in the corner of a sidewalk square to murals that cover the entire sides of buildings.

In West Hollywood, three towering buildings make up the Pacific Design Center (named Center Blue, Center Green, and Center Red, for obvious reasons) just off the West Hollywood Hub, where interior design arts from all over the world show off their wares.

Local retail line the streets through to Plummer Park, a historic site with an open park and World War II monuments. 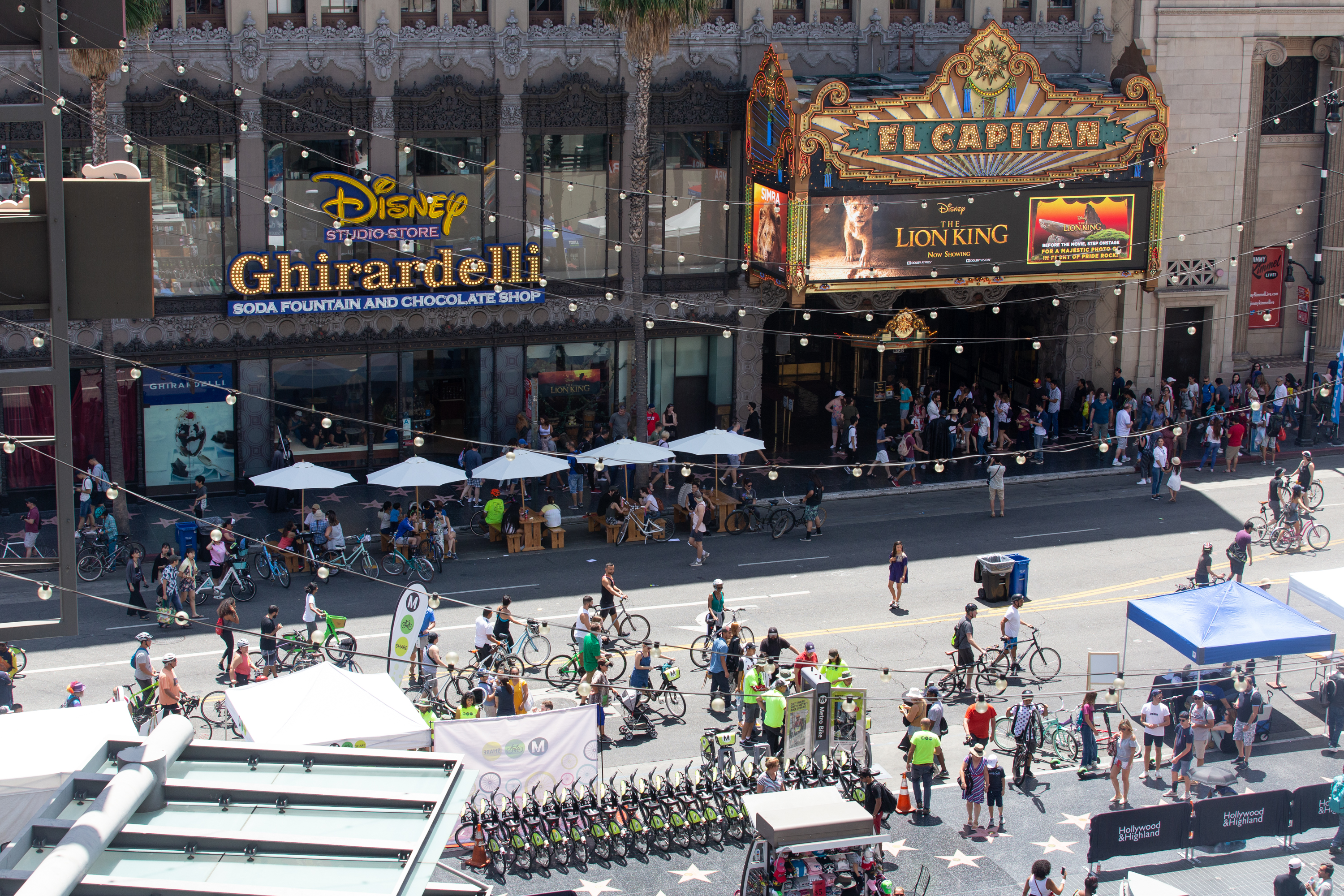 This is also the center of the Hollywood Walk of Fame, the 15-block row of brass stars commemorating achievement in the arts. There are over 2,700 of these stars – and you won't see any of them driving by in a car. Take a moment to check out a name you've never seen before, and get a glimpse of Hollywood history at your feet! 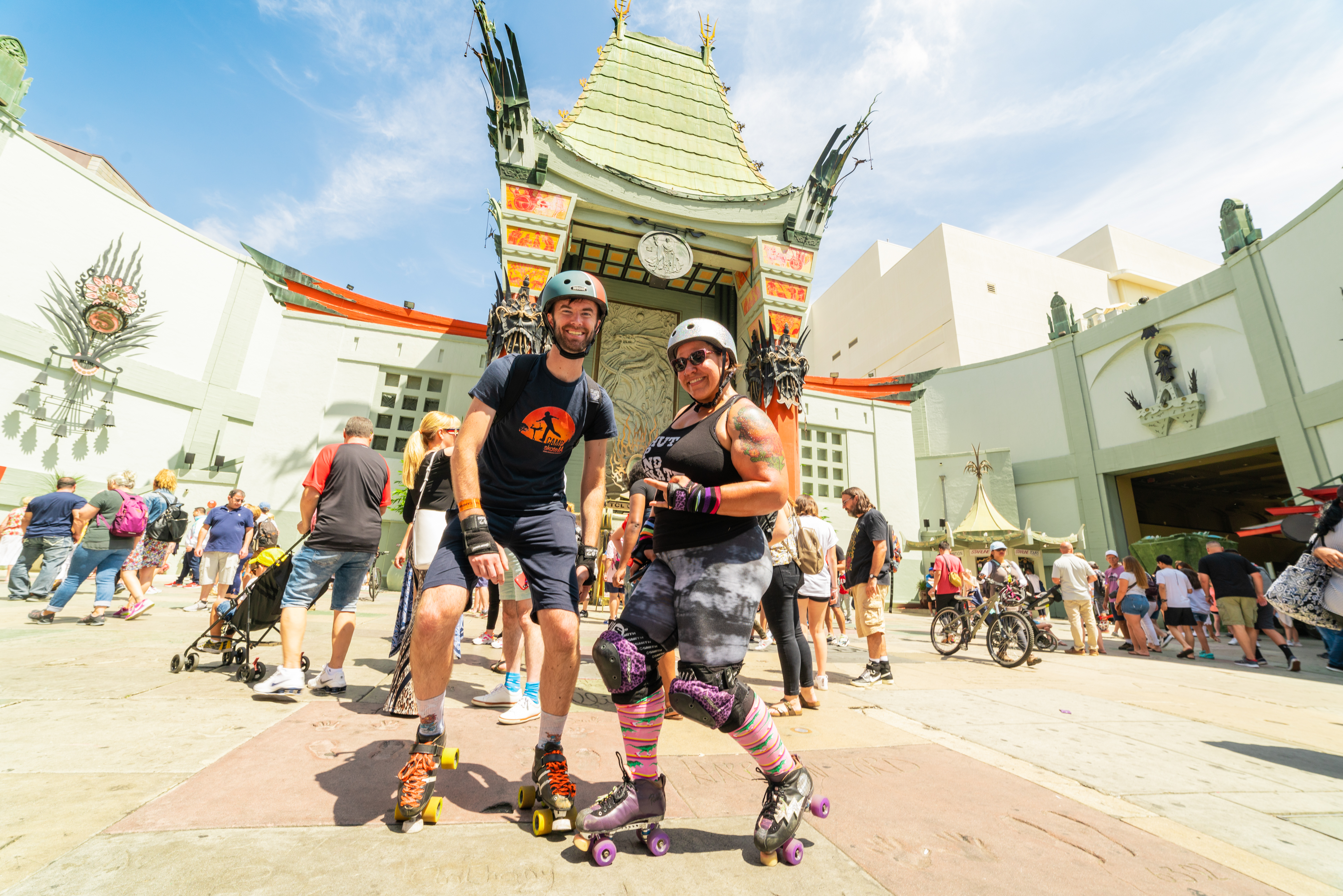 The Pantages Theatre (currently showing Moulin Rouge! The Musical) and the Capitol Records Tower (designed like a stack of records on a turntable – remember those?) are located at Hollywood and Vine. This is where Hollywood's first "high rise" buildings cropped up in the 1920s, and the intersection carries a lot of "haunted Hollywood" lore.

The Hollywood / Vine Metro station is arguably filled with the most artwork of any Metro rail station. Designed by local Los Angeles Chicano artist Gilbert Luján (aka Magu), the design is inspired by SoCal cultural motifs including a ceiling covered with empty film reels, and benches for waiting passengers fashioned as classic car lowriders on pedestals.

The route also crosses over the 101 Freeway, in what will likely be the least-congested travel over that highway you will ever experience. 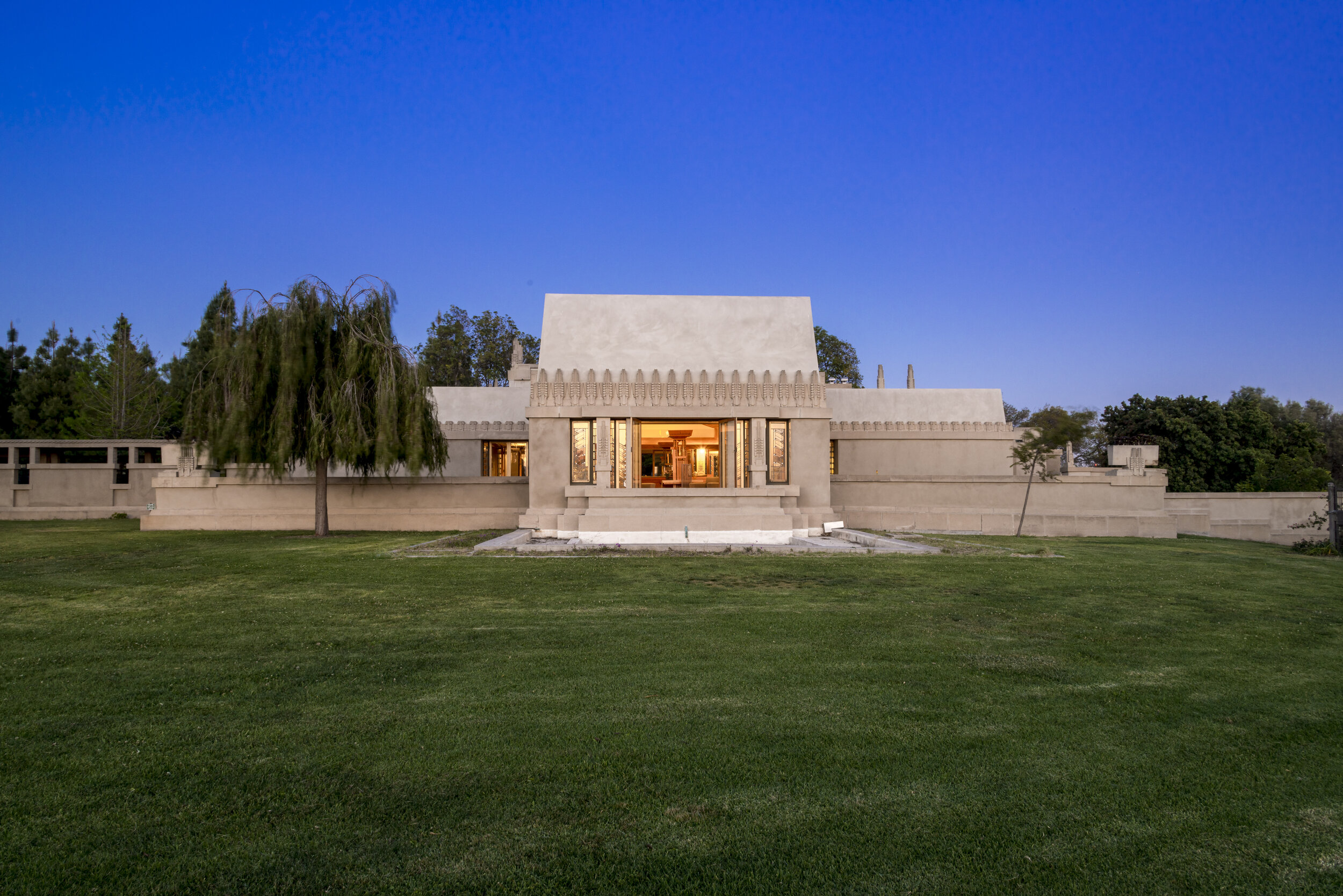 A number of beautiful public parks line the route, including the Barnsdall Art Park. It is centered around the Hollyhock House, the first Los Angeles project of Frank Lloyd Wright and built in 1920. There is an art center, a conservatory of music, an independent Shakespeare Company, and much more.

Pay attention to the green space and open parks along your route. They change the feel of each neighborhood, and bring so much joy to the people close by. It's encouraging to see more areas of LA become parks, and see more people take advantage of what they offer.

CicLAvia turns streets into public parks for a Sunday; we hope to see more parts of the city become parks forever. 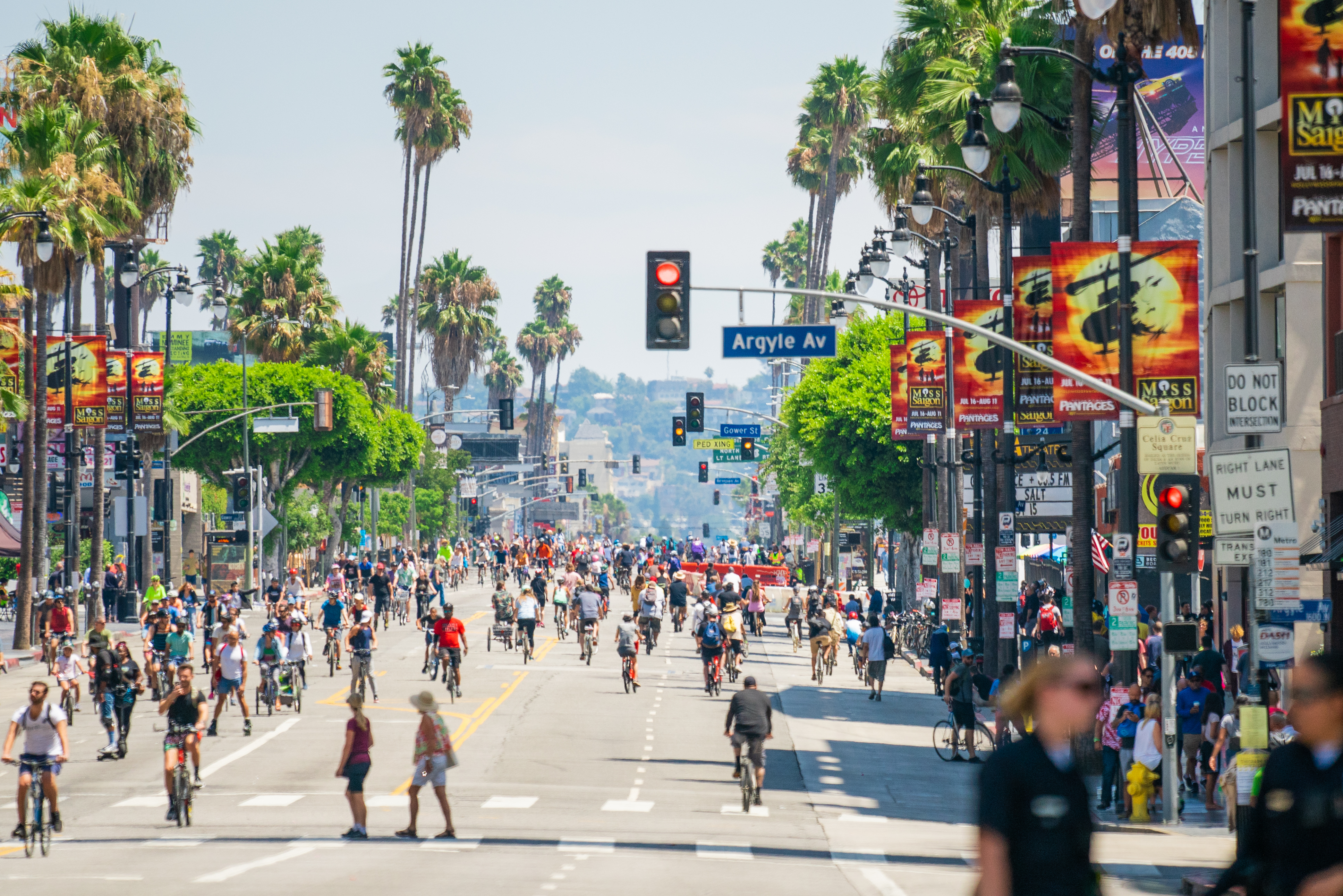 As always, you’ll find booths from neighborhood groups at our Hubs along the route, and a few food trucks, too. There are also countless shops and eateries along the route with dishes you may not find anywhere else. Some argue that sushi first appeared in Los Angeles before anywhere else in the United States. What might you find and enjoy on Sunday? 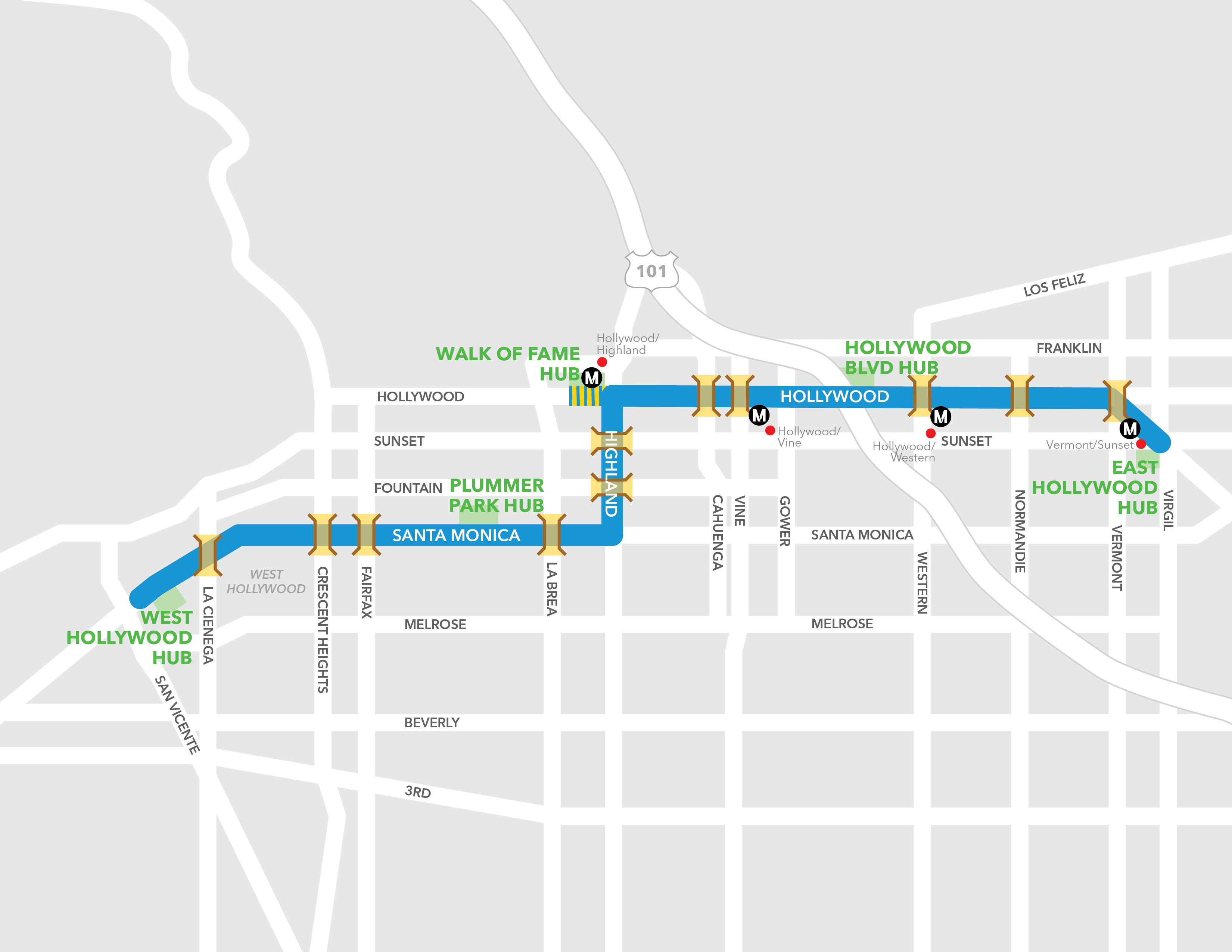 Explore Santa Monica Blvd, Highland Ave, and Hollywood Blvd with us at CicLAvia—Meet the Hollywoods on Sunday, August 21, and discover your own gems.

And be sure to join our email list for more event updates, future route maps, and other details – we have more events this year, and much more planned for 2023!