DV: Why did Pick My Solar pick (see what I did there) CicLAvia as a partner?

CB: The first time I attended CicLAvia it was an eye-opener to a side of LA that I had not experienced. Every demographic, every neighborhood, and every age group coming together in the tens of thousands to enjoy the experience together. I knew that Pick My Solar needed to be a part of this in anyway it could. And to be a part of it as a company, we had to make sure that we added to the experience in our own unique way, so we set out to build a wooden arch made of bicycle parts. Arches are typically used to support a structure, and to us this was symbolic of CicLAvia supporting the culture of Los Angeles through bicycles. Our team spent a few hours after work every day for well over a month to design, construct, and polish off this Arch. When it was done, we had a 15-foot-wide and 12-foot-tall arch that we hoped CicLAvians would accept into their CicLAvia experience. 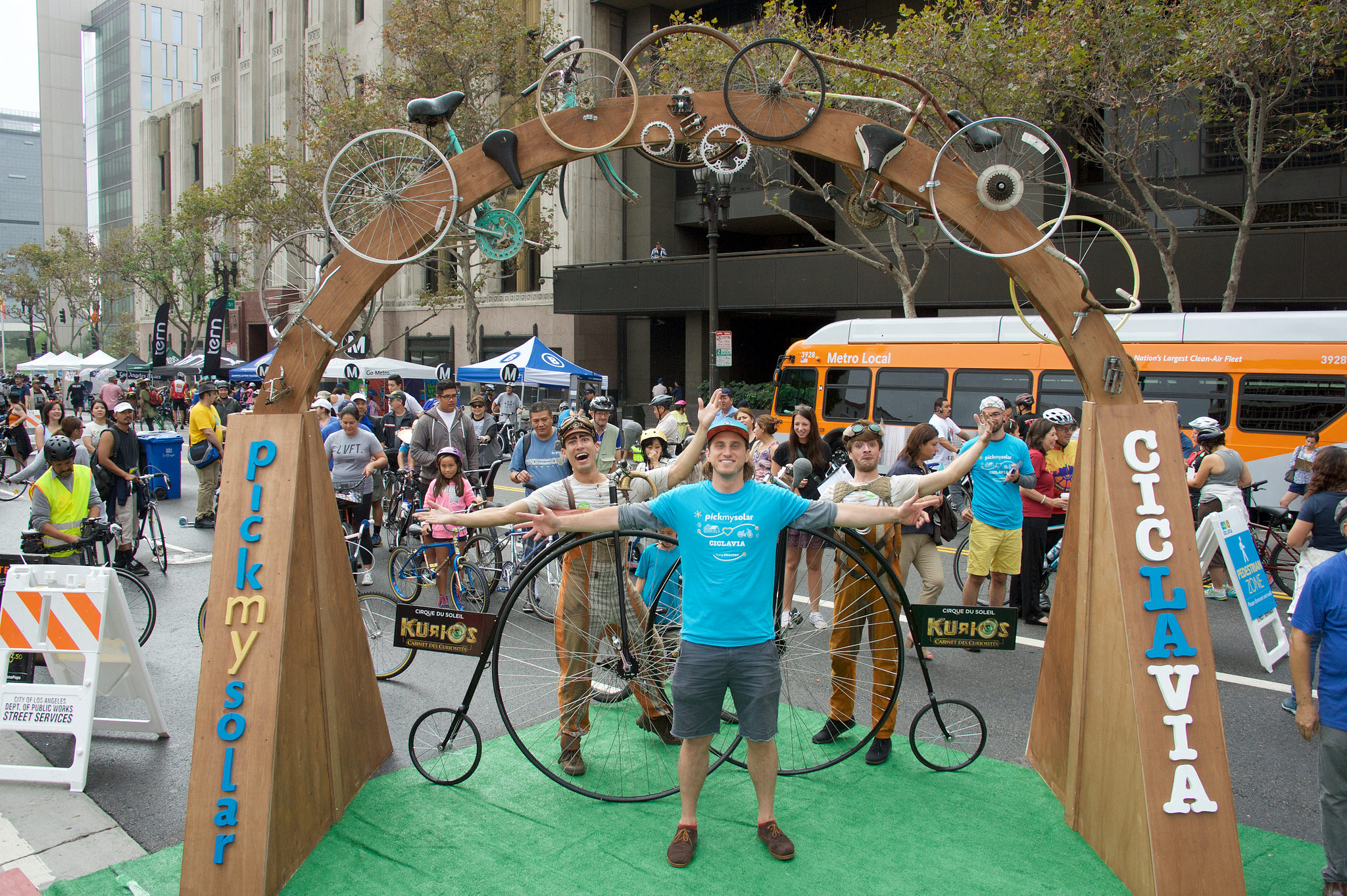 DV: What's your favorite memory from any of the CicLAvias in 2016?

CB: My favorite memory was seeing people line up in the dozens to take a picture with the arch. At that moment we knew that we added to the CicLAvia experience and helped create memories. It felt amazing to contribute to such an iconic event. Over the course of the year several thousand CicLAvians took pictures with the Arch.

DV: What's the coolest thing you saw at CicLAvia in the past year?

CB: Residents along the route throwing CicLAvia parties in their front yard was something I didn’t expect. How awesome is it that the community that is hosting the event is participating to that extent!

DV: You're an LA transplant, like myself. Do you do anything differently now that you've had four CicLAvias under your belt?

CB: To be honest, I did not own a bike before my first CicLAvia. Buying a bicycle was not something that ever came up after making the move to Los Angeles a few years ago. Since the first CicLAvia, I now own a bike, I ride a bike to lunch every day, and I ride my bike to the beach at least once a week. Riding a bicycle gives you such a different perspective on the neighborhood you live in and is a great energy release when working long hours.

DV: What item in the CicLAvia store do you have your eye on?

DV: What's one thing Pick My Solar wants to tell the CicLAvia world?

CB: If you haven’t watched the new Leonardo DiCaprio documentary, Before the Flood, watch it! Our planet is changing, and every one of us can help contribute to a less carbon dominated future. This documentary renewed my devotion to our company’s mission; to educate homeowners on the pros of solar energy and bring transparency to an industry plagued with unknowns. A very misguided perception of solar is that it’s expensive, when in fact solar payments are typically less than what you currently pay to your utility.