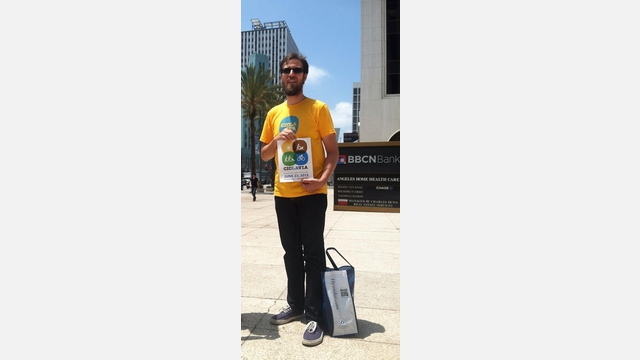 Tell us a bit about your background.
I'm a relative newcomer to California and Los Angeles, having moved here from Florida in 2008. I'm an Information Technology professional and freelance business consultant, with a background in *nix systems administration and data center storage/networking infrastructure. I live in NELA and I love seeing parts of the city I'm not as familiar with.
How did you get involved with CicLAvia?
I actually attended my first CicLAvia this April, on the DTLA-Venice route. I found it to be such fun that I wanted to get involved with June's upcoming Iconic Wilshire Boulevard CicLAvia.
How do you think we can make CicLAvia better?
I think that by allowing both sides of the street to be used by the event, as well as the extended hours are going to make this upcoming event better than the last one. One thing I would like to see would be more frequent CicLAvias. Quarterly would allow one for each season, but maybe we can do better and have one per month :) ?
How have you volunteered? Why have you volunteered?
I'm volunteering with the first and second outreaches, and I also participated in the Celebrate LA fest. I briefly touched upon my reasons for volunteering in the second question, but I mainly wanted to help because I believe that the event is a great way to get the public out onto the street and see a part of the city they might not be as familiar with. When you're walking or riding a bicycle, you tend to see your surroundings in a completely different perspective than just driving on a road would allow. You smell different restaurants, you see a variety shops and vendors, you interact in a completely new way that is exciting.
What's in store for you? What's coming up in your life?
It's kind of a fault of mine but I don't tend to make firm plans and commitments. I would like to further develop my professional career and potentially do some adventure cycling. I have been reading about cyclists going up or down the Coast Highway, and even ocean-to-ocean on a self-supported bicycle tour and it seems like it would be a lot of fun.
Do you like this post?
CicLAvia Stories
Local Gems: Enjoy South LA
CivSalons with AARP Los Angeles
In South LA, a View to the Future
CicLAvia Store