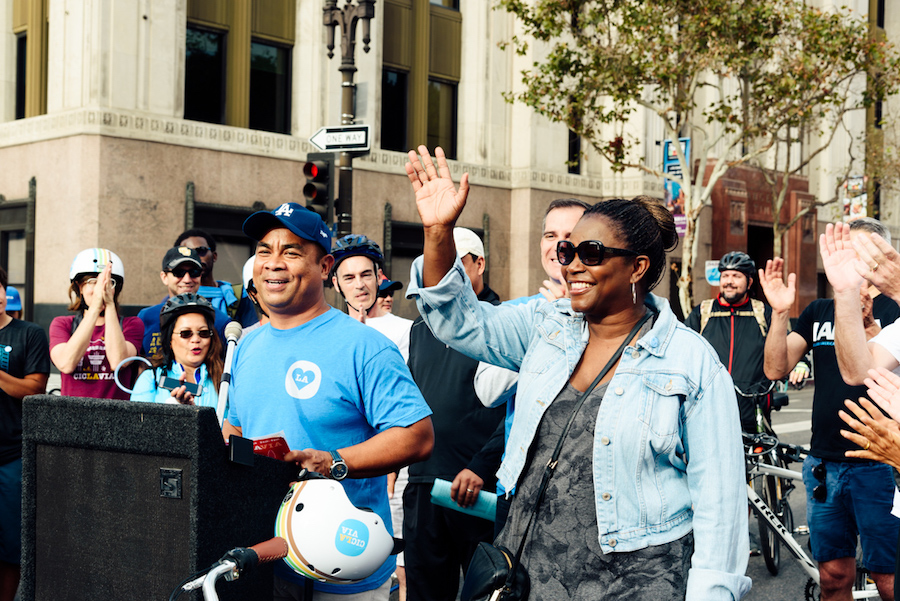 The Olympic mural on Broadway is a local gem that features Board Member Valerie Brisco-Hooks, an inspiring member of the CicLAvia family.

At the CicLAvia—Heart of LA route in 2017 CicLAvia staff members were riding on Broadway with Board Member Valerie Brisco-Hooks. They rode toward 2nd St and saw a mural of 1984 Olympic athletes. Valerie gestured and said, “that’s me.”

It came as a genuine surprise to staff members, who, although they were on their seventh trip along CicLAvia’s annual and original route, hadn't noticed it until then.

That artwork near the corner of 2nd St and Broadway Blvd features her likeness as an ode to her feats in the ‘84 Olympic Games in LA. For us, learning of the mural was a reminder of LA’s history and those who make LA a special place, and that CicLAvia helps you see many things in the city for the first time. 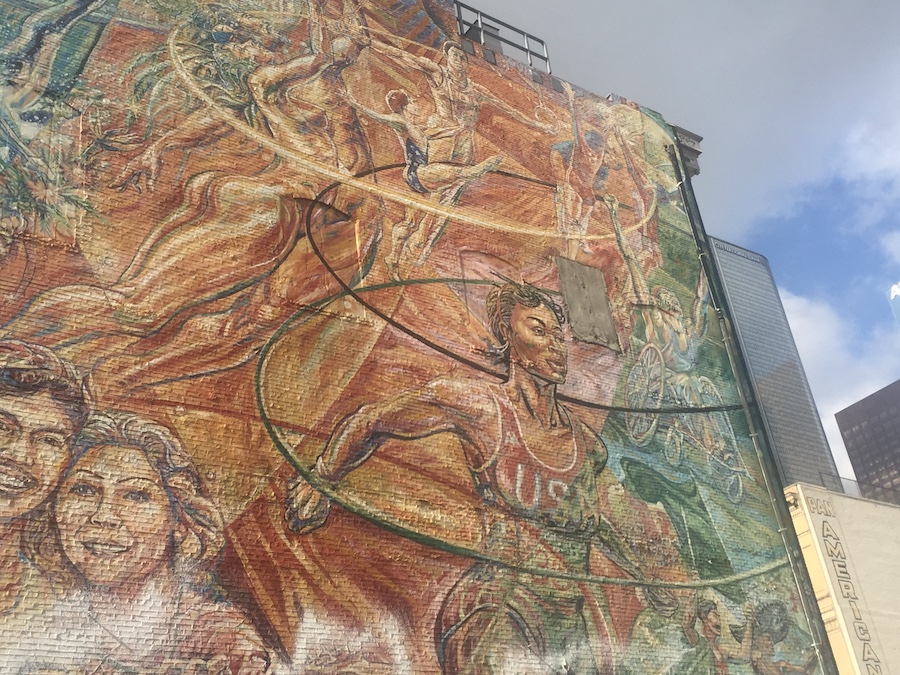 Valerie became the first person to ever win Olympic gold medals in the 200- and 400-meter races, and the first woman to run the 400 meters in under 50 seconds. What’s more, she turned around and played a pivotal role to secure the U.S. Women’s team a gold medal in the 4x400 relay. And it was done in her beloved hometown. Watch the race!

Raised in South LA and attending high school in Watts, she started running track at Locke High School. The school’s track bears the Brisco family name after a stray bullet from a nearby drive-by shooting tragically killed her brother, Robert. She was inspired in part to run to honor Robert, who was a runner himself, and quickly discovered she had a gifted talent. She could run. Valerie was fast.

She put her mind to honing her skill. She trained and then trained some more. Early on in her career, she stood out of the crowd, helping California State University, Northridge win the 1979 NCAA National Championship and later that year competing in the Pan American Games.

But a soaring career came back to earth when life took a turn in 1982; Valerie and her husband, Alvin Hooks, were expecting a child. She stopped training during the pregnancy, then exited the sport altogether to raise Alvin Jr.

What seemed to be career-ending turned out to be just a pause.

“If you believe in something enough, then you will achieve it.” —Valerie Brisco-Hooks

That she hadn’t run competitively in nearly two years — or even trained at all in that time — and had gained 40 pounds from the pregnancy, seemed to be insurmountable hurdles blocking a comeback. Undeterred, with grueling training and determination, she shed the weight and returned to form to mount a berth in the Olympics and then make history in her home city. 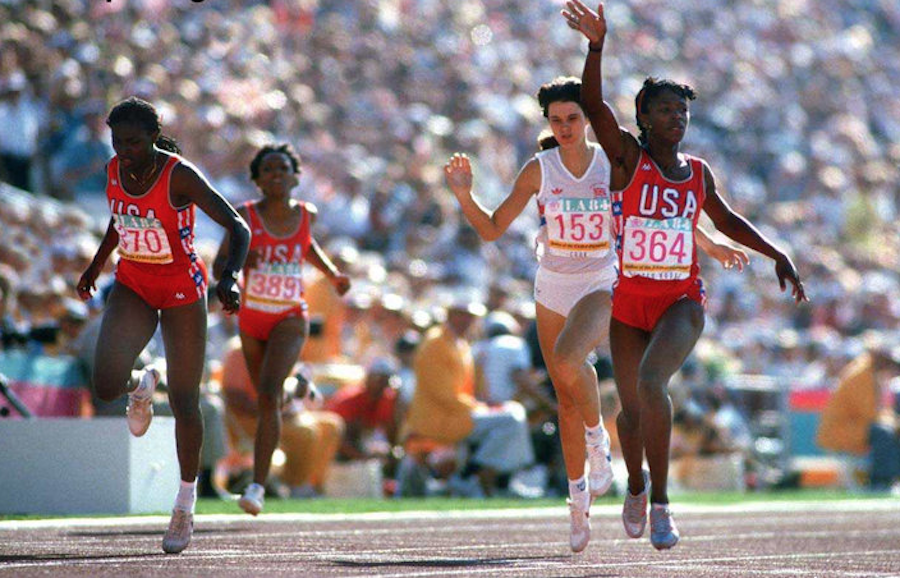 The setting for her historic victories was fitting for someone who loves LA as much as Valerie does. When asked what her favorite city in the world is, she doesn’t hesitate in responding, “Los Angeles.”

“I have traveled all over the world, and there’s no other place on Earth I’d rather live than in Los Angeles. I love LA.” 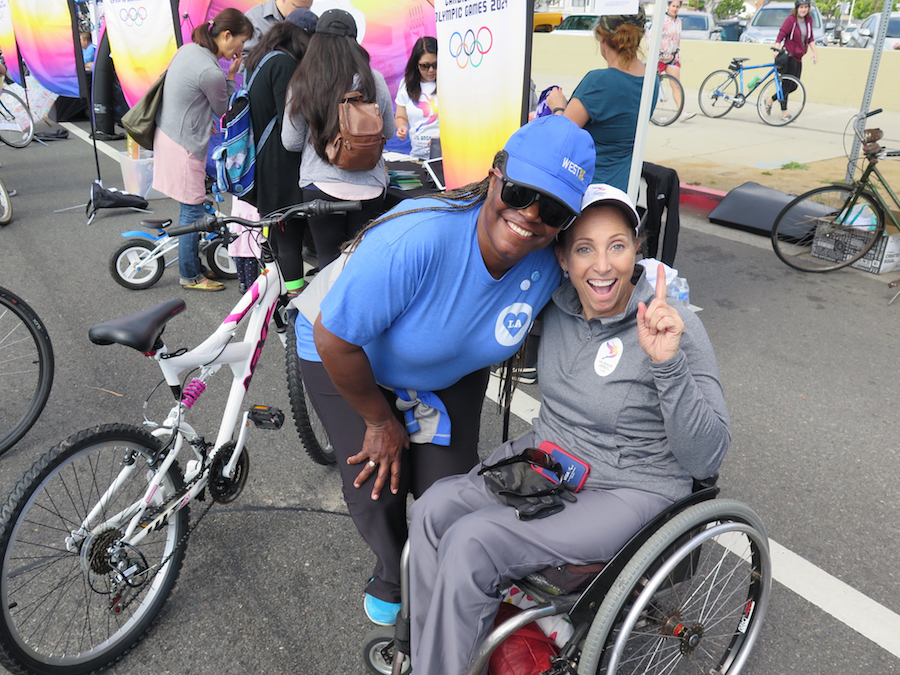 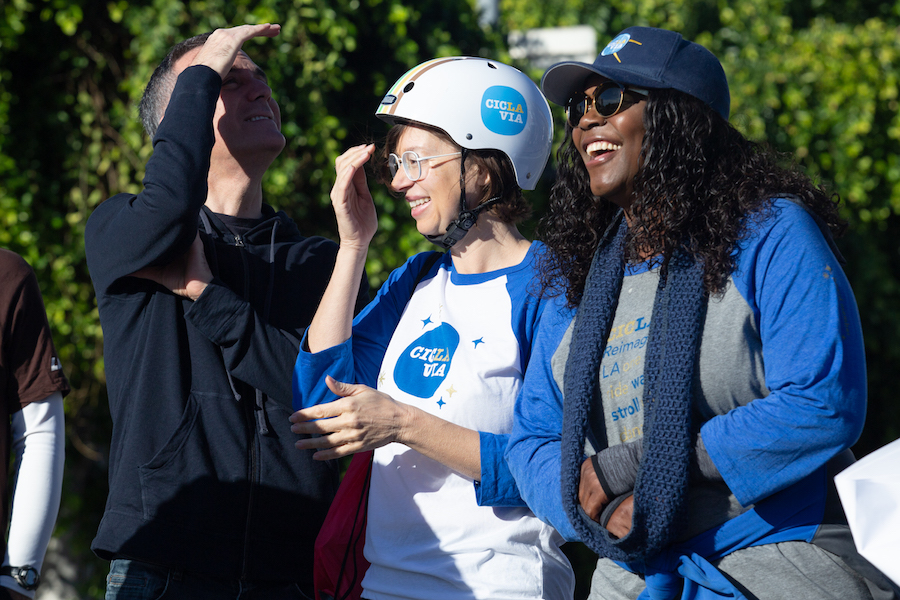 We couldn’t be any prouder of having Valerie on the CicLAvia team. She draws parallels between CicLAvia and the Olympics. To her, both create similar feelings in attendees. “They both bring people joy, bring people out and unite them… there’s a real sense of camaraderie in both experiences.”

The next time you’re on Broadway biking, running, or walking — whether at CicLAvia or not — make sure to take time to look at the mural. It’s one of those things we might miss in a car, but when we slow down we spot some of the local gems all around us.