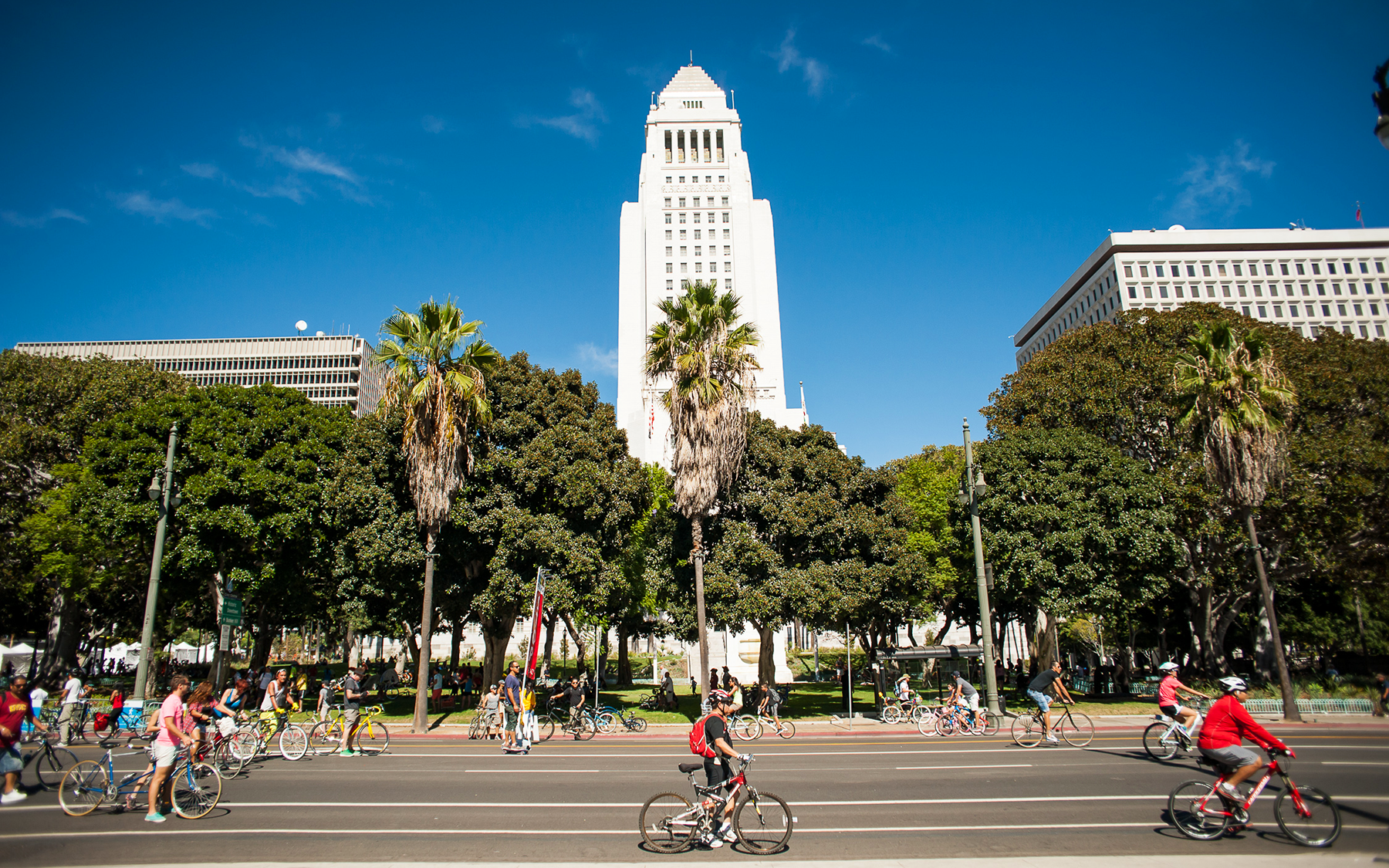 Towering at 32 floors is Los Angeles City Hall, the 91-year old center of LA government. Fun fact: The concrete in its tower was made with sand from each of California's 58 counties and water from its 21 historical missions. The observation deck is open (and free!) M-F, but on Sunday pull up a pink chair in Grand Park and enjoy the view from the ground. The park itself is host to periodic art installations, and home to the Court of Historic American Flags, memorials to the Vietnam War and Ukrainian genocide, and a statue of George Washington.

Grand Park leads up to a row of cultural points on Grand Avenue, including the Dorothy Chandler Pavilion, the Ahmanson Theater, the Mark Taper Forum, and the (newly renovated) $41 million Music Center Plaza. 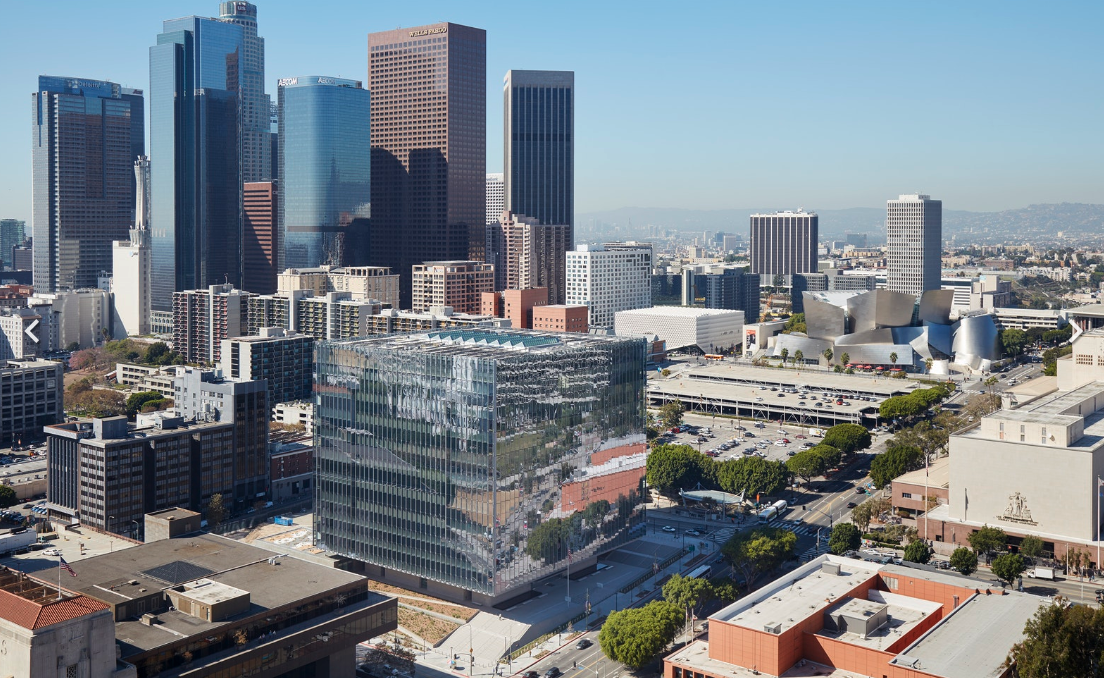 The Civic Center Hub sits by the art deco Los Angeles Times Building, the United States Courthouse – Los Angeles (designed to look like a floating cube), the Caltrans District 7 Headquarters (recognizable from movies and TV), and the LAPD Headquarters (which has a small park and several pieces of art in its accessible courtyard). 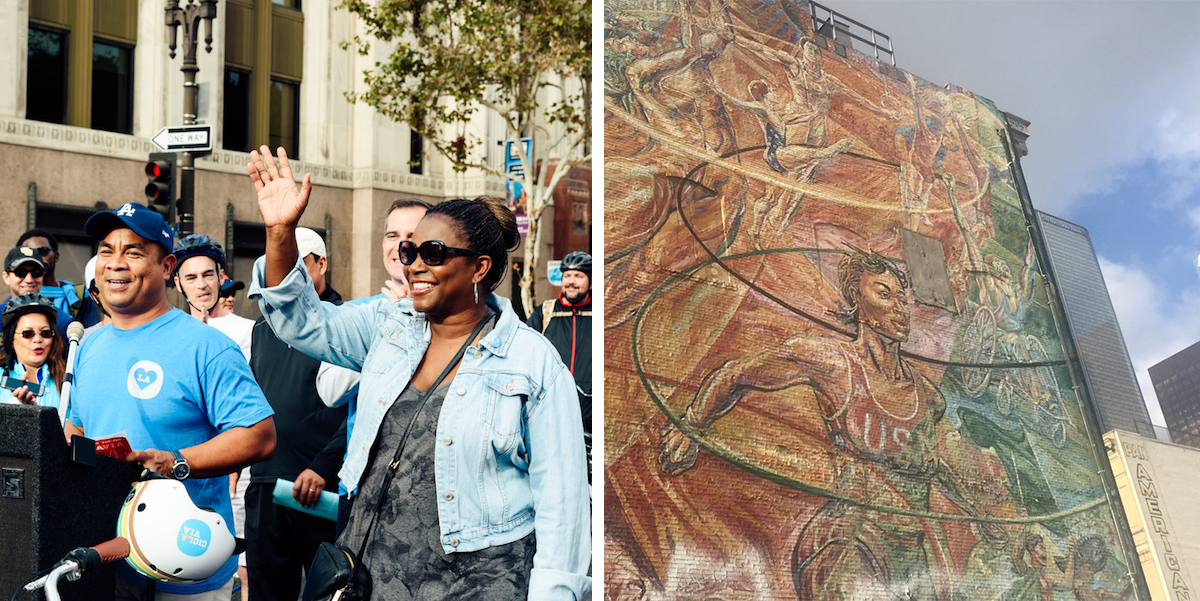 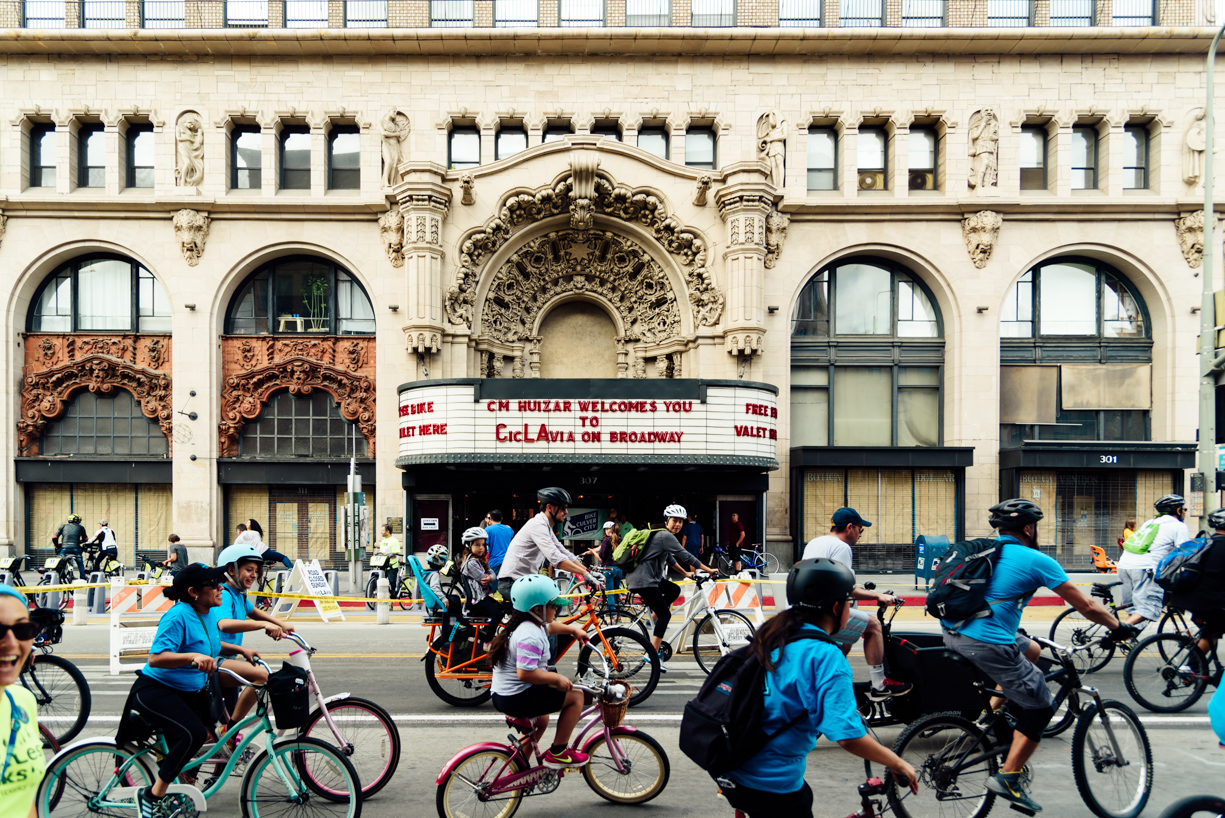 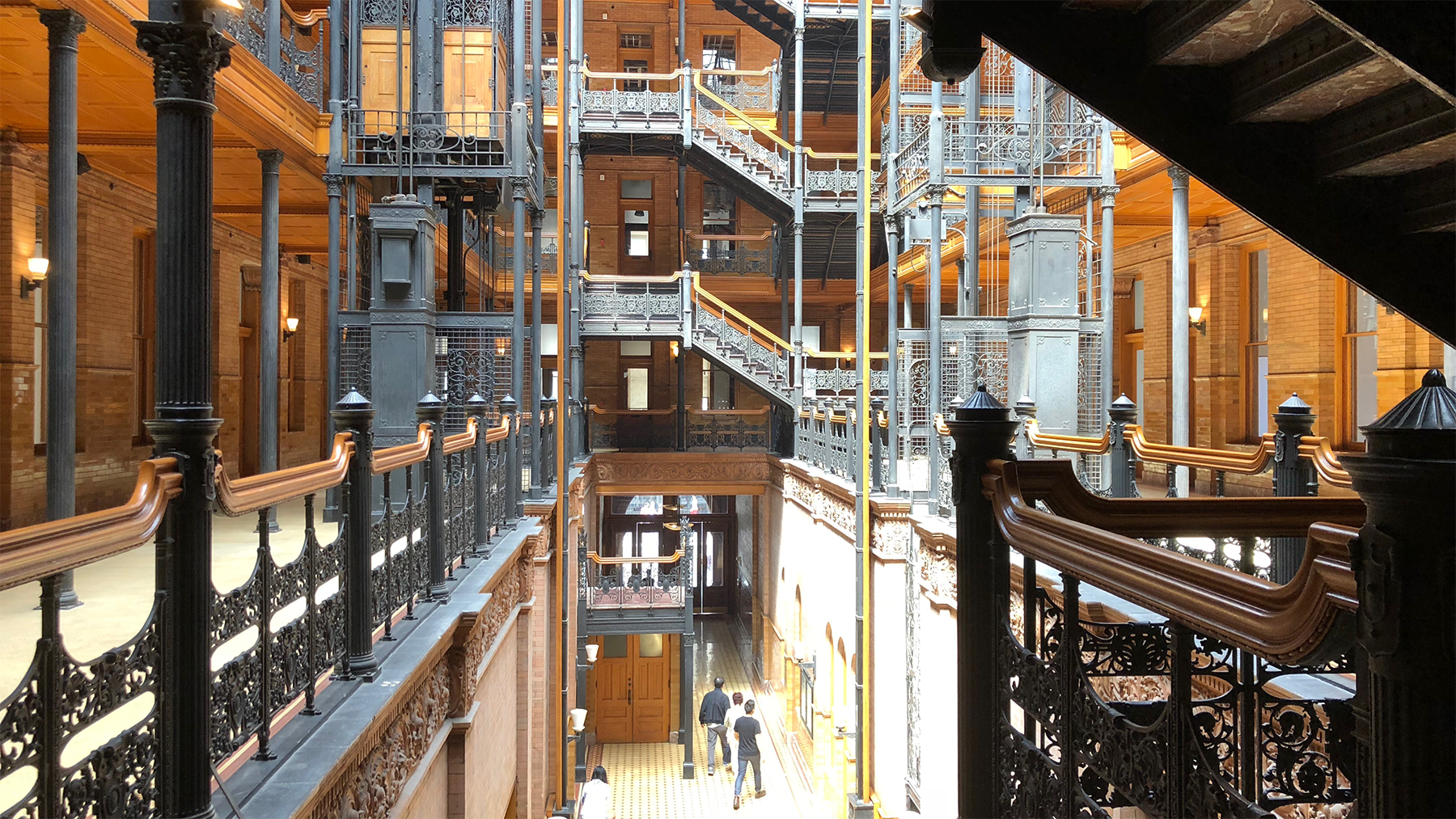 The Bradbury Building is one of the most iconic works of architecture in the country. You may recognize it from the films Blade Runner and (500) Days of Summer. It’s one of four office buildings in LA to be designated a National Historic Landmark. It’s free to the public, and open from 10 am to 5 pm on Sunday. 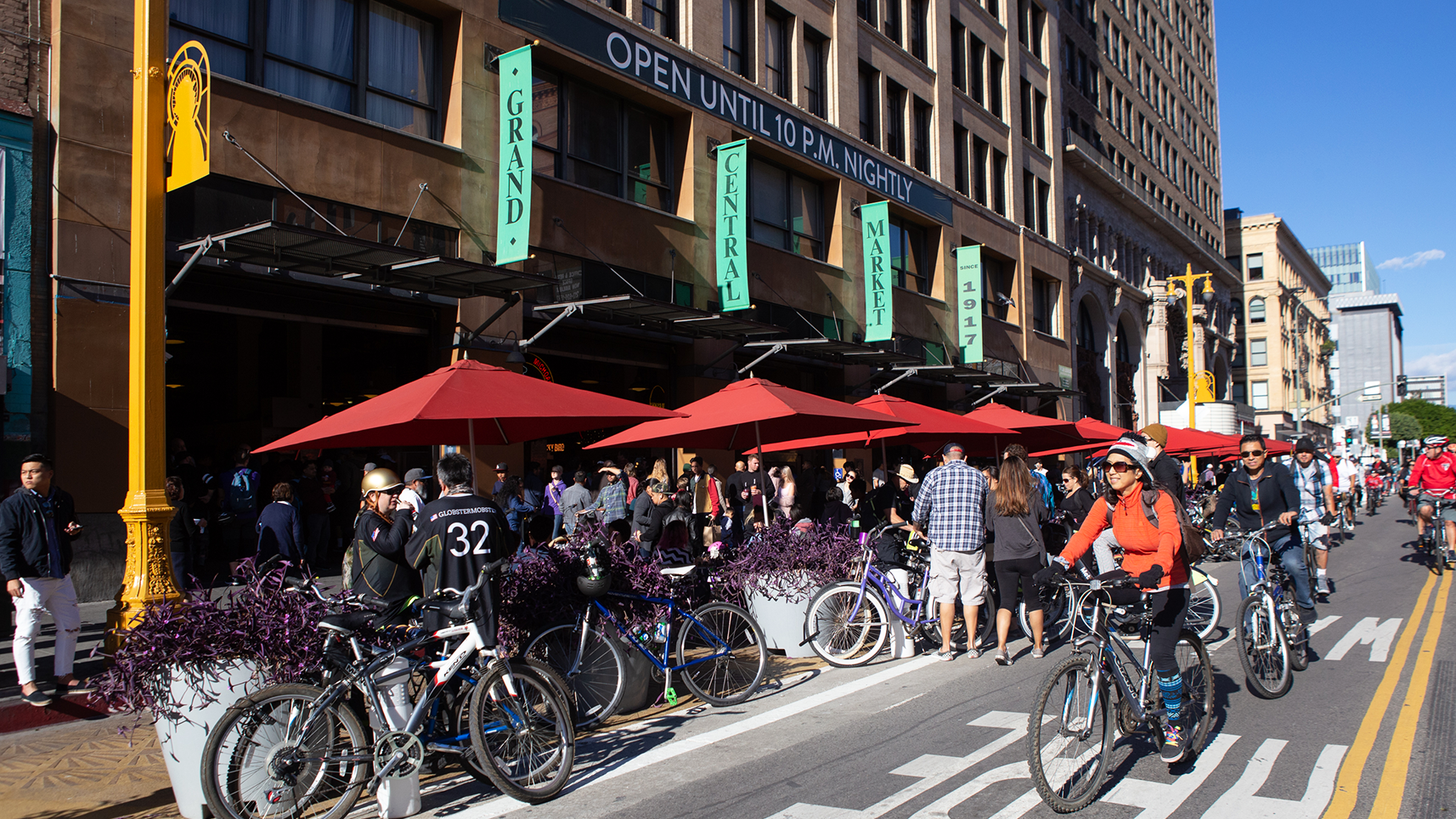 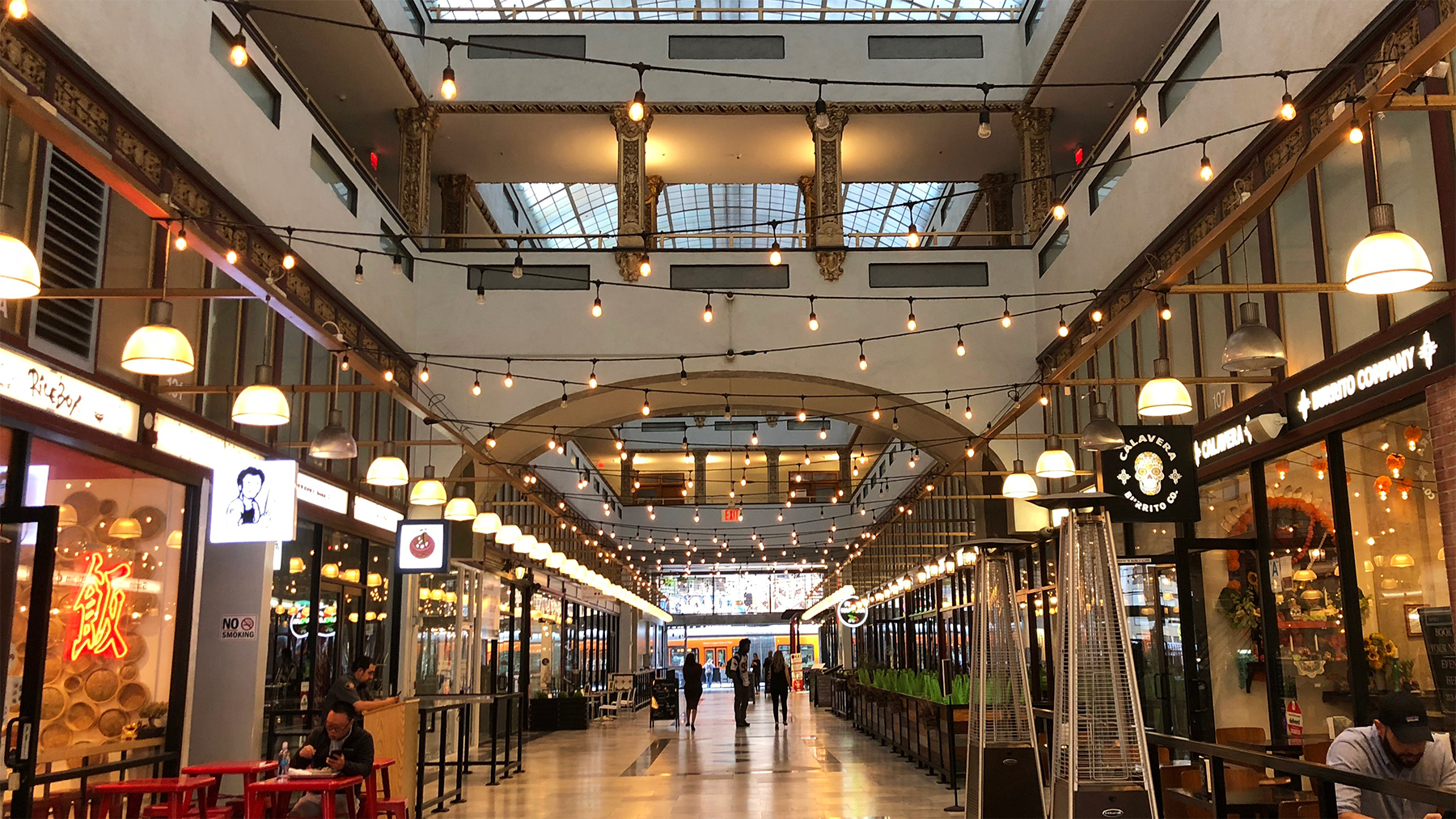 The Spring Arcade, publicized as a “city within a city” when it opened in 1925, is now a dining destination with restaurants like Garçons de Café and Guisados.

Stop by St. Vincent’s Court, an oft-missed, hidden breezeway that cuts underneath on 7th Street just a block north of Broadway, to get the Instagram photos that everyone else will miss. And up 7th Street you can find restaurants, bars, and shopping destinations, from the Brack Shop and Little Sister to the large shopping complex The Bloc. 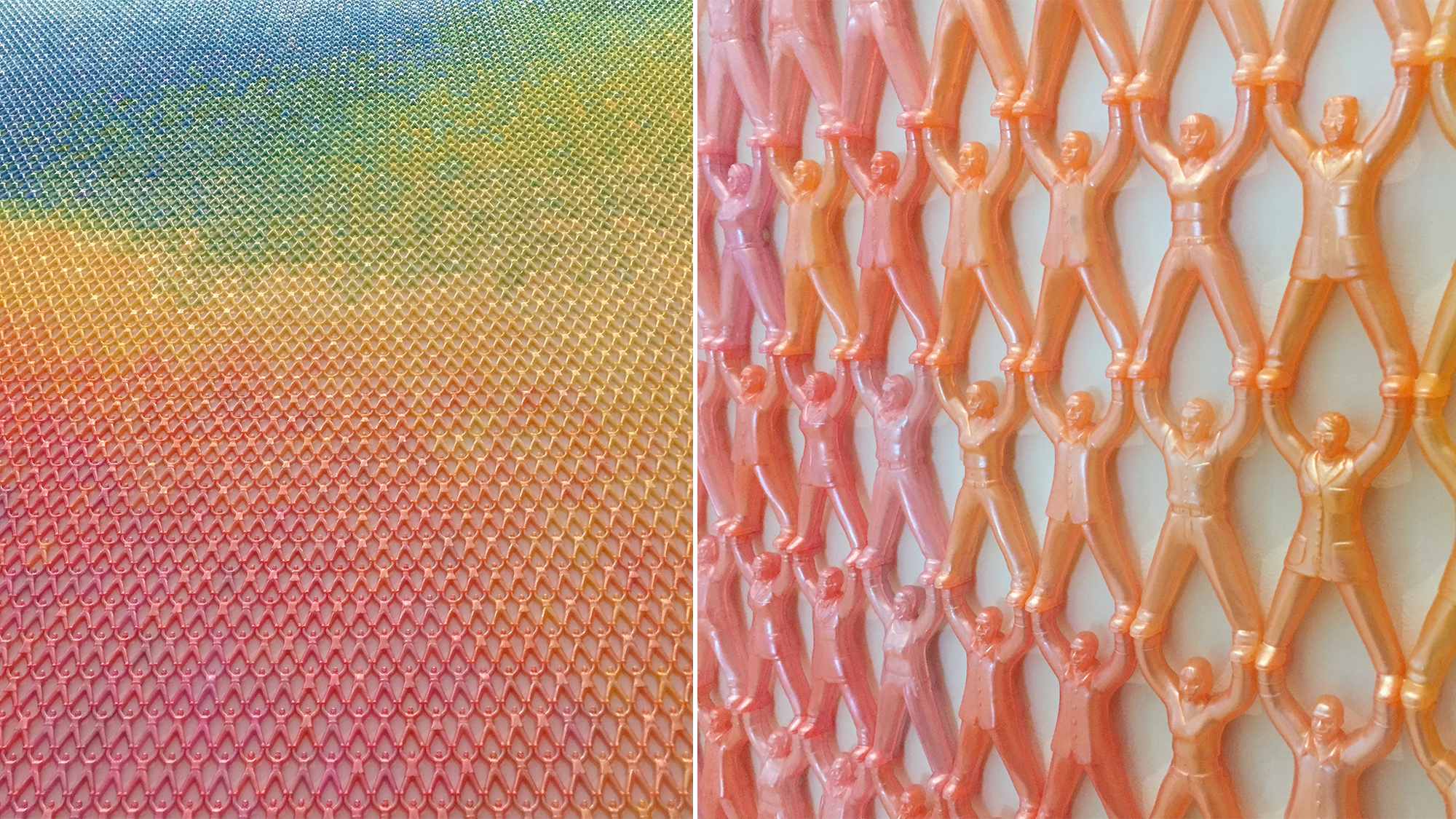 LA’s tallest building (thanks to its spire) is the Intercontinental Hotel / Wilshire Grand, which boasts the highest open-air bar in the western hemisphere known as Spire 73, and the ground-floor art installation “Screen” by Korean artist Do Ho Suh - which is free and accessible to the public.

Also along this route you’ll find architectural gems like the Mayfair Hotel (newly renovated) and the Italian Renaissance-inspired Roosevelt Building. 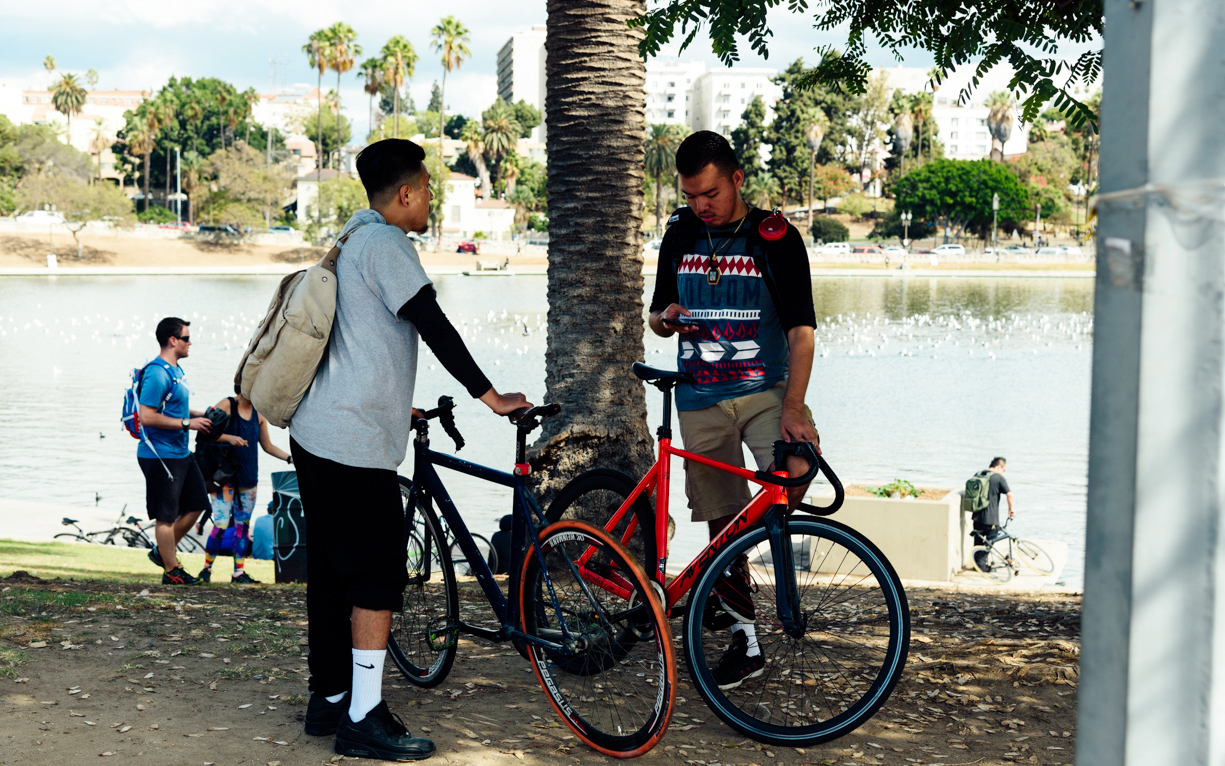 The MacArthur Park hub itself sports a beautiful urban park, with scattered memorials (including one to the eponymous General MacArthur), sculptures, recreation centers, a fountain and a massive lake fed by natural springs. It’s a perfect place to relax and find some serenity during or at the end of your CicLAvia experience.

It’s also home to Levitt Pavilion, the public space that hosts 50 free outdoor concerts every year where attendants bring their own foldout chairs and picnic meals. 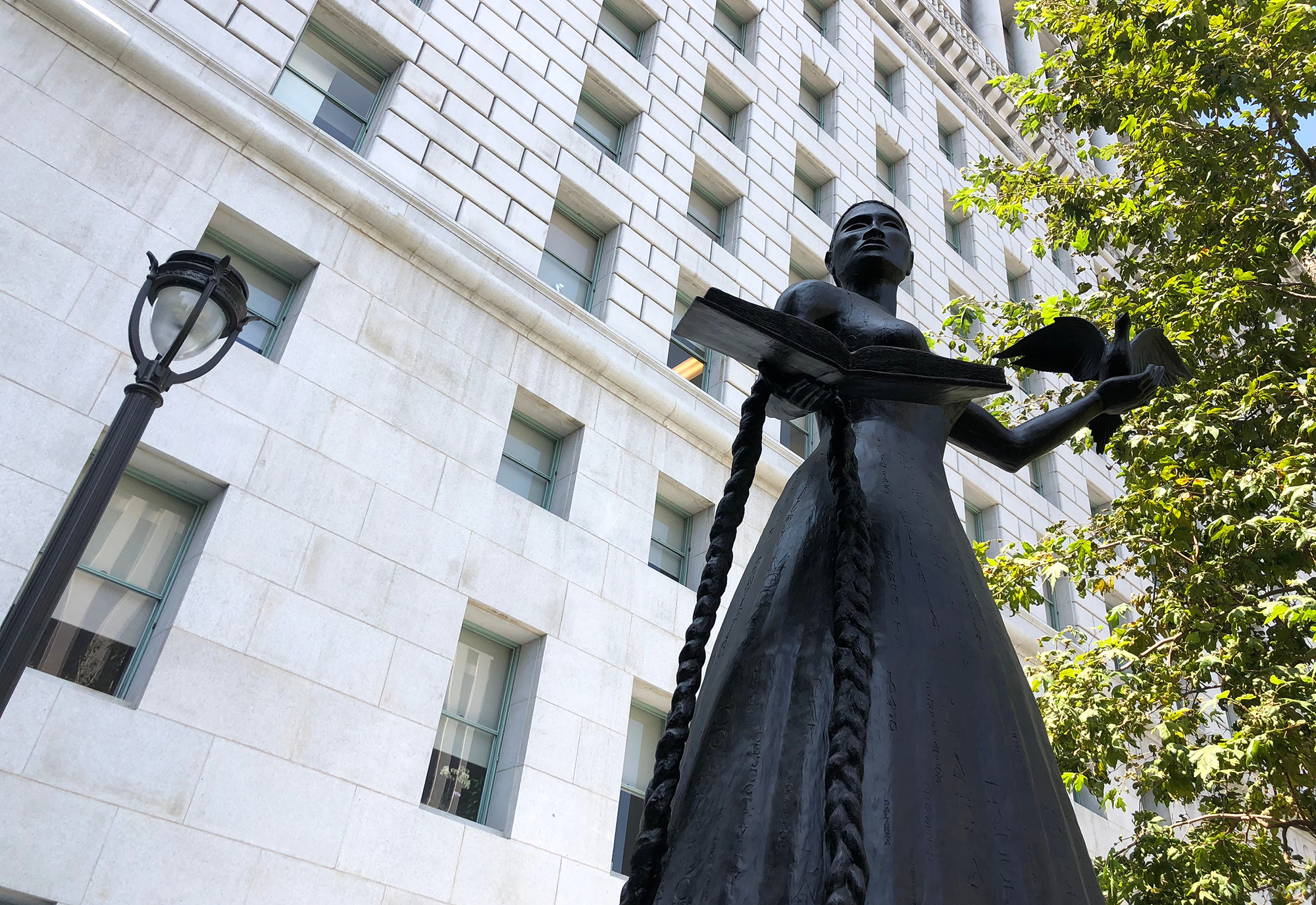 An imposing presence along Broadway towards Chinatown is the Hall of Justice, the oldest surviving government building in the LA Civic Center. In front (visible just down Temple Street) is “Embodied,” a bronze statue described by artist Alison Saar as a “figure of grace and virtue to represent the spirit of justice.” 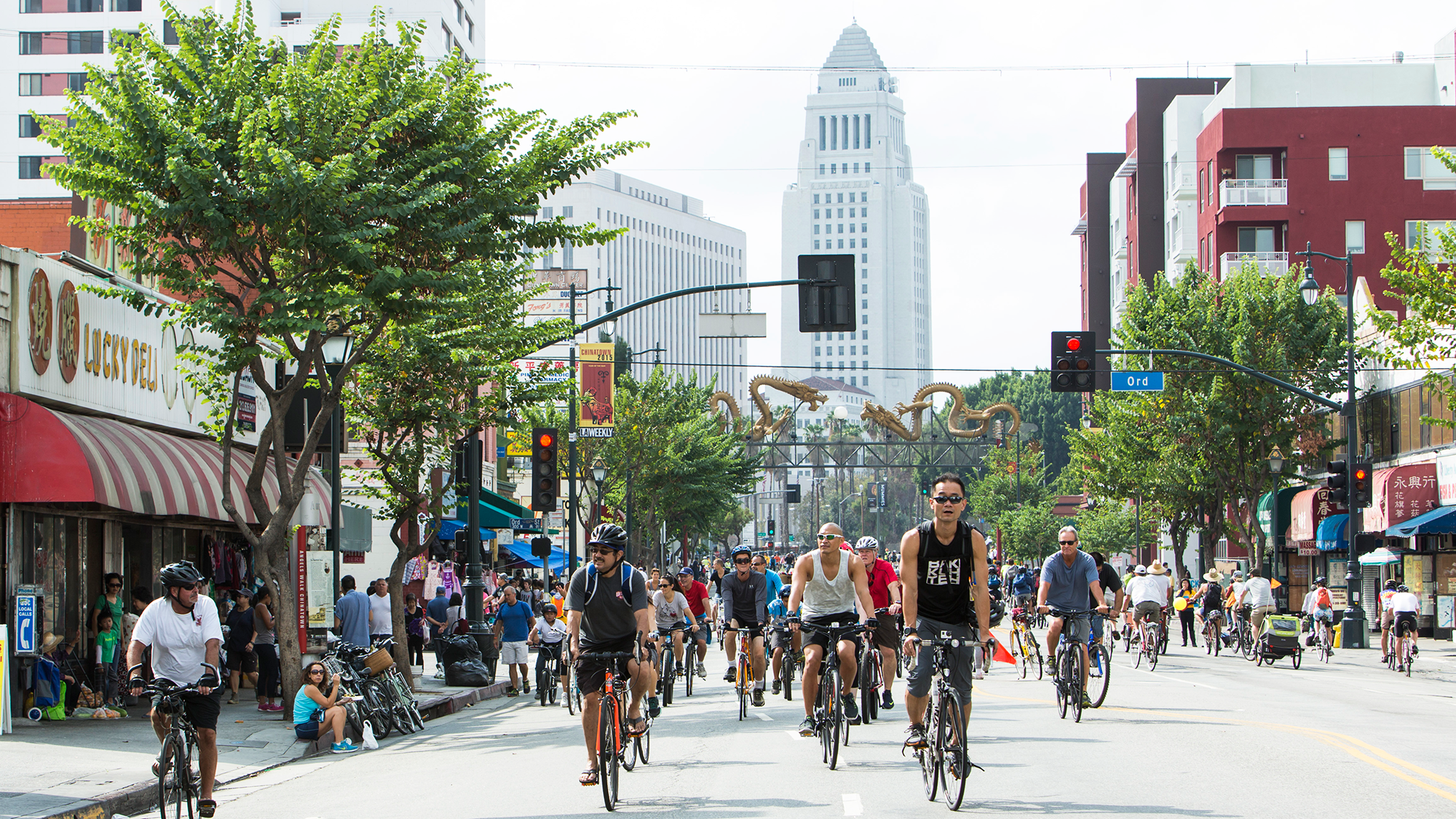 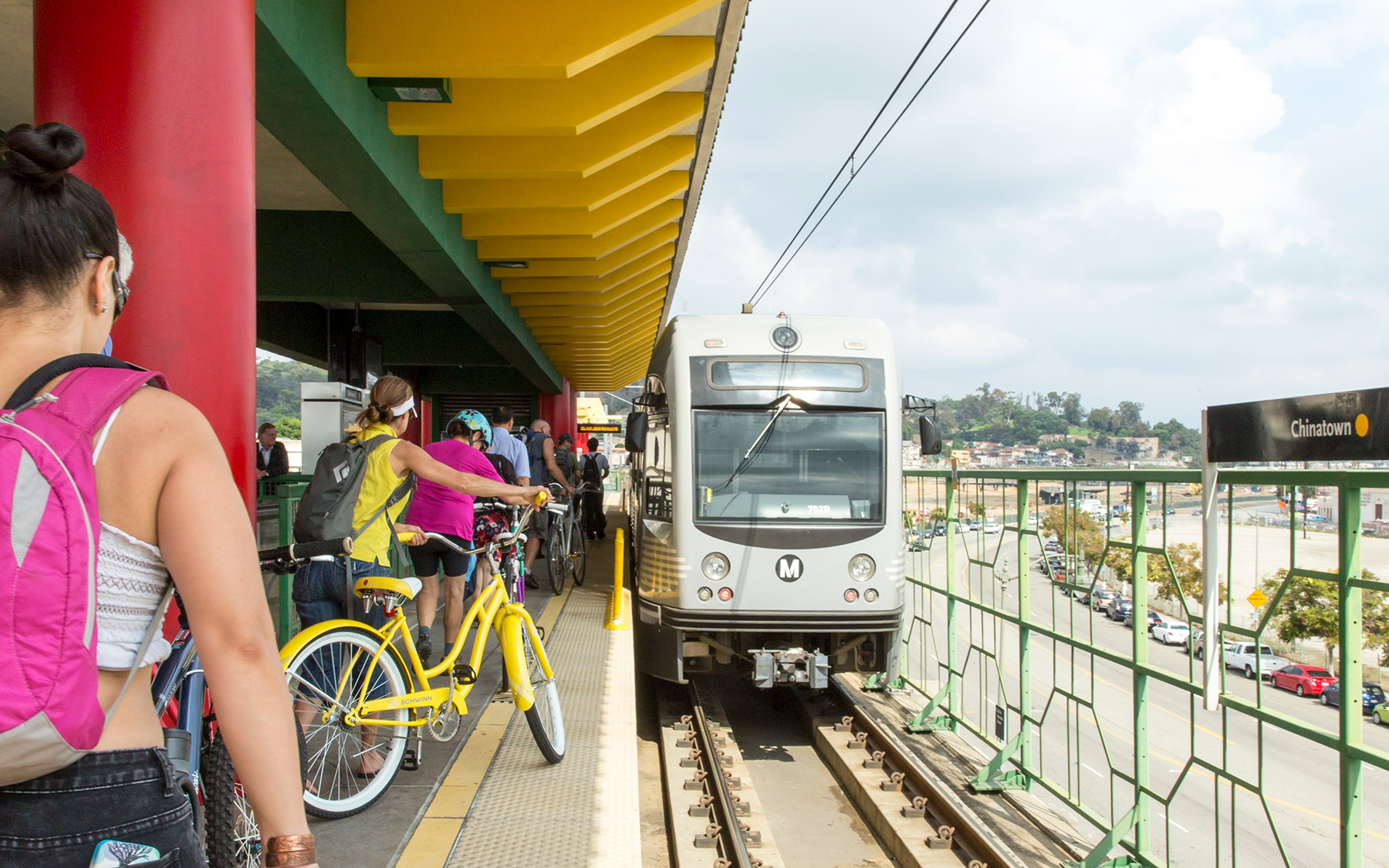 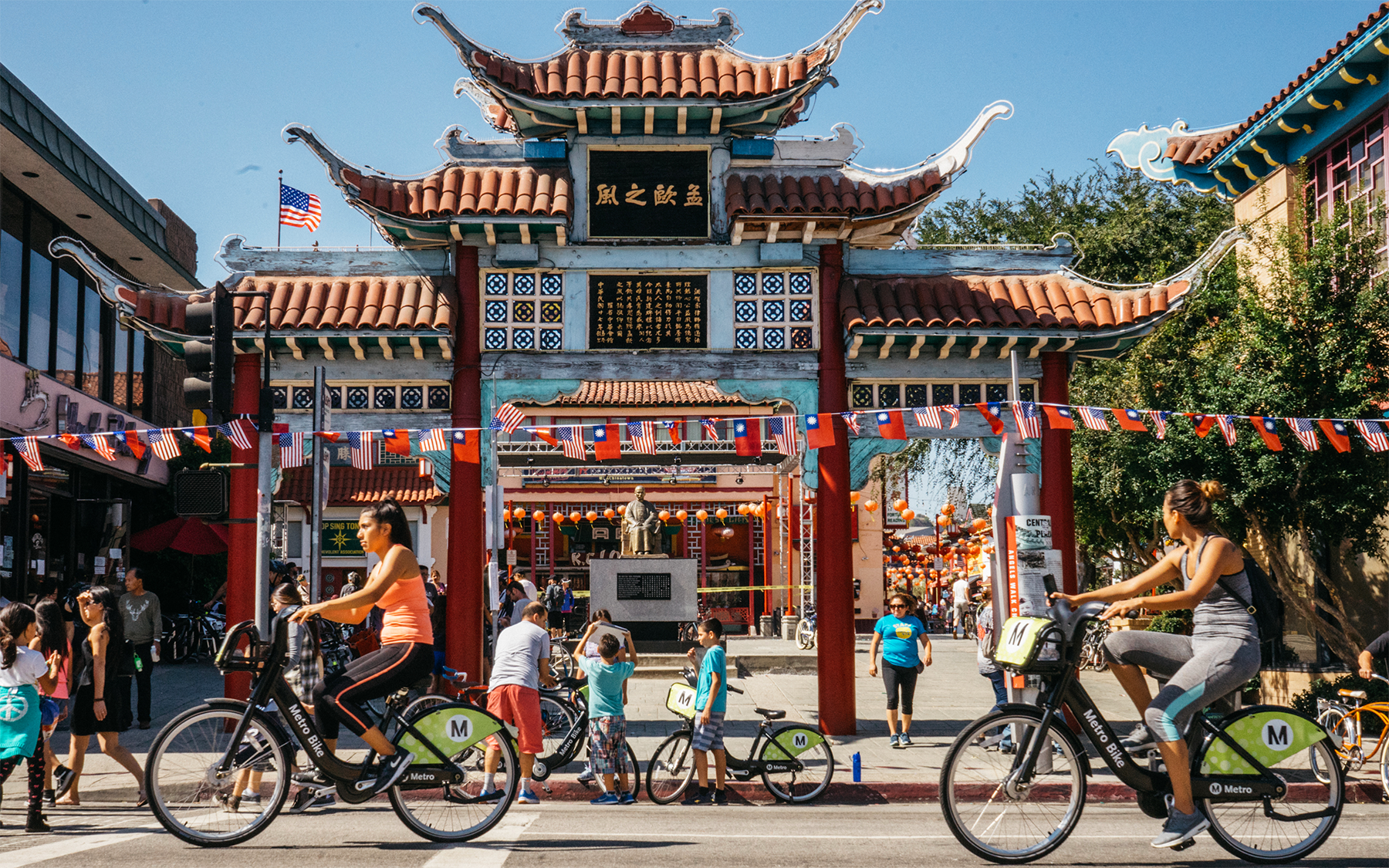 The Arts District of Los Angeles is regularly visited by tourists looking to capture Instagram selfies with angel wings and other street art, and is home to new businesses, restaurants, breweries and working spaces. 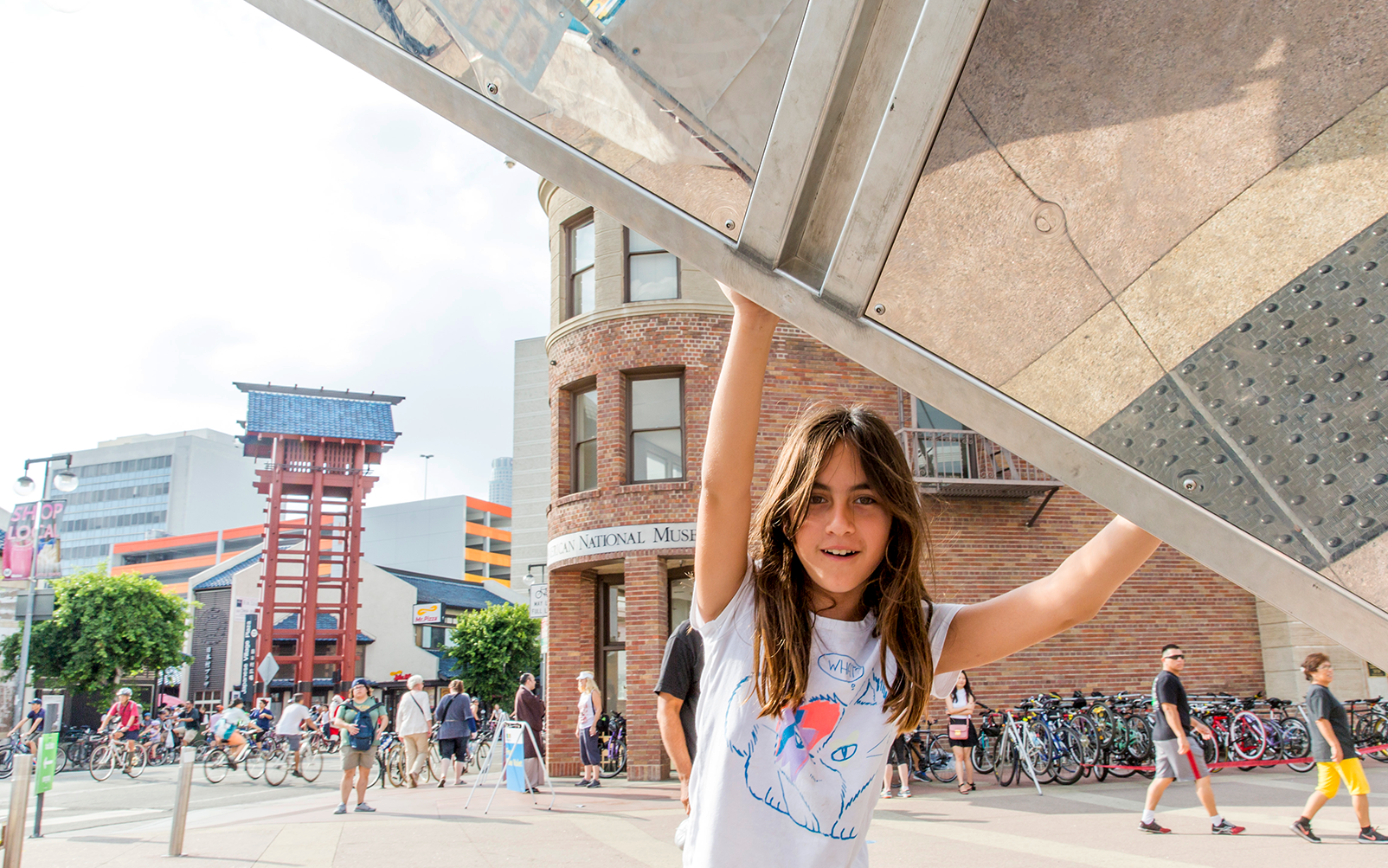 The Japanese American National Museum in Little Tokyo covers 130 years of Japanese American history. In front sits “Oomo Cube,” a Rubik's Cube sculpture with photographic panels and internal lighting; artist Nicole Maloney used the OOMO shorthand for “Out of Many, One.” The museum is open on Sundays from 11 am – 5 pm, and admission is $7-16, however on October 6 the museum is hosting its free 11th Annual Kokoro Craft Boutique. 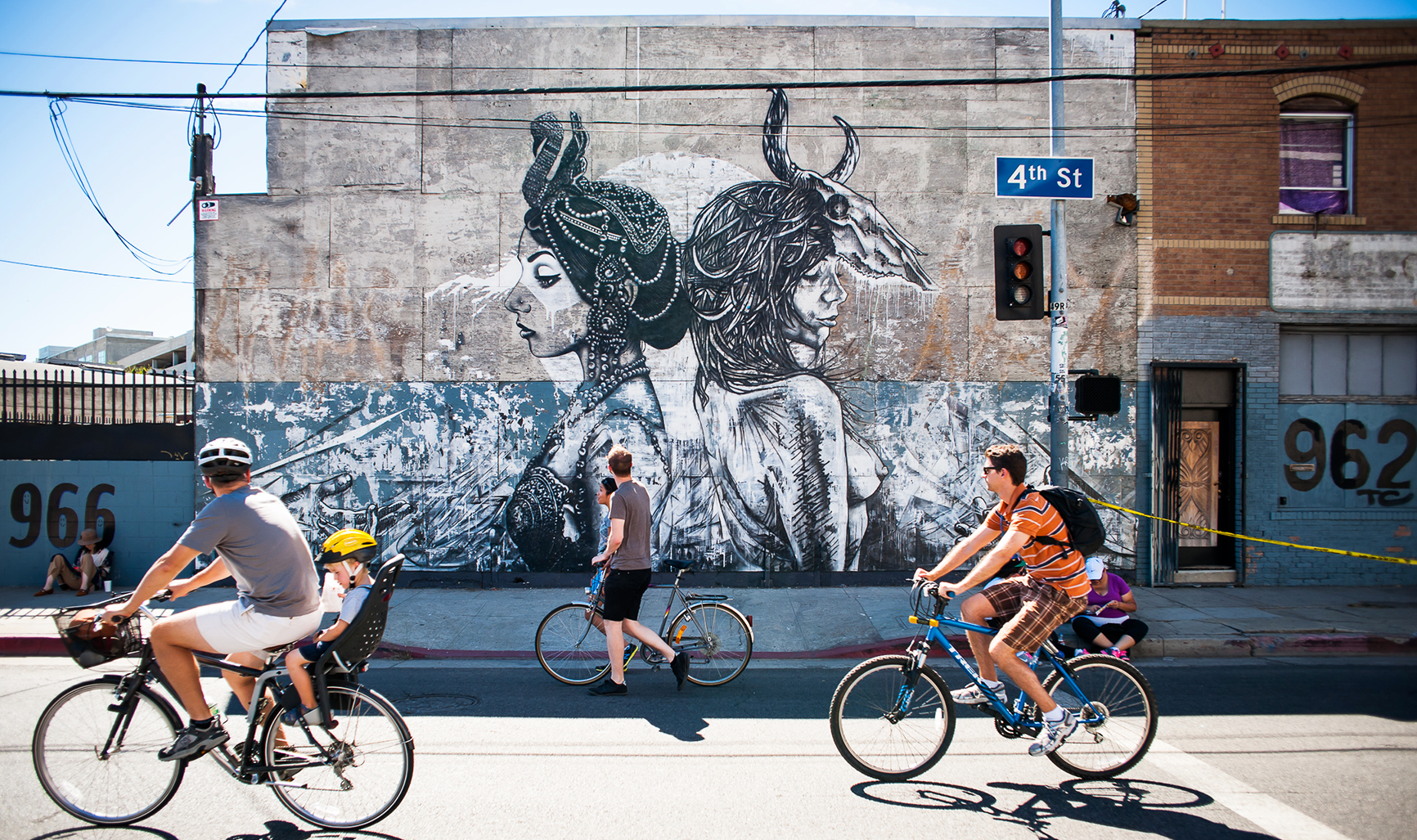 Public art and murals line 4th street, from a mix of street artists from across Los Angeles and some from around the world, including several pieces from Starfighter (aka Christina Angelina - herself a UCLA grad).

Passing by SCI-Arc, the avant-garde Southern California Institute of Architecture, reveals “League of Shadows,” P-A-T-T-E-R-N-S’s large, obscured black structure at the corner of its parking lot. 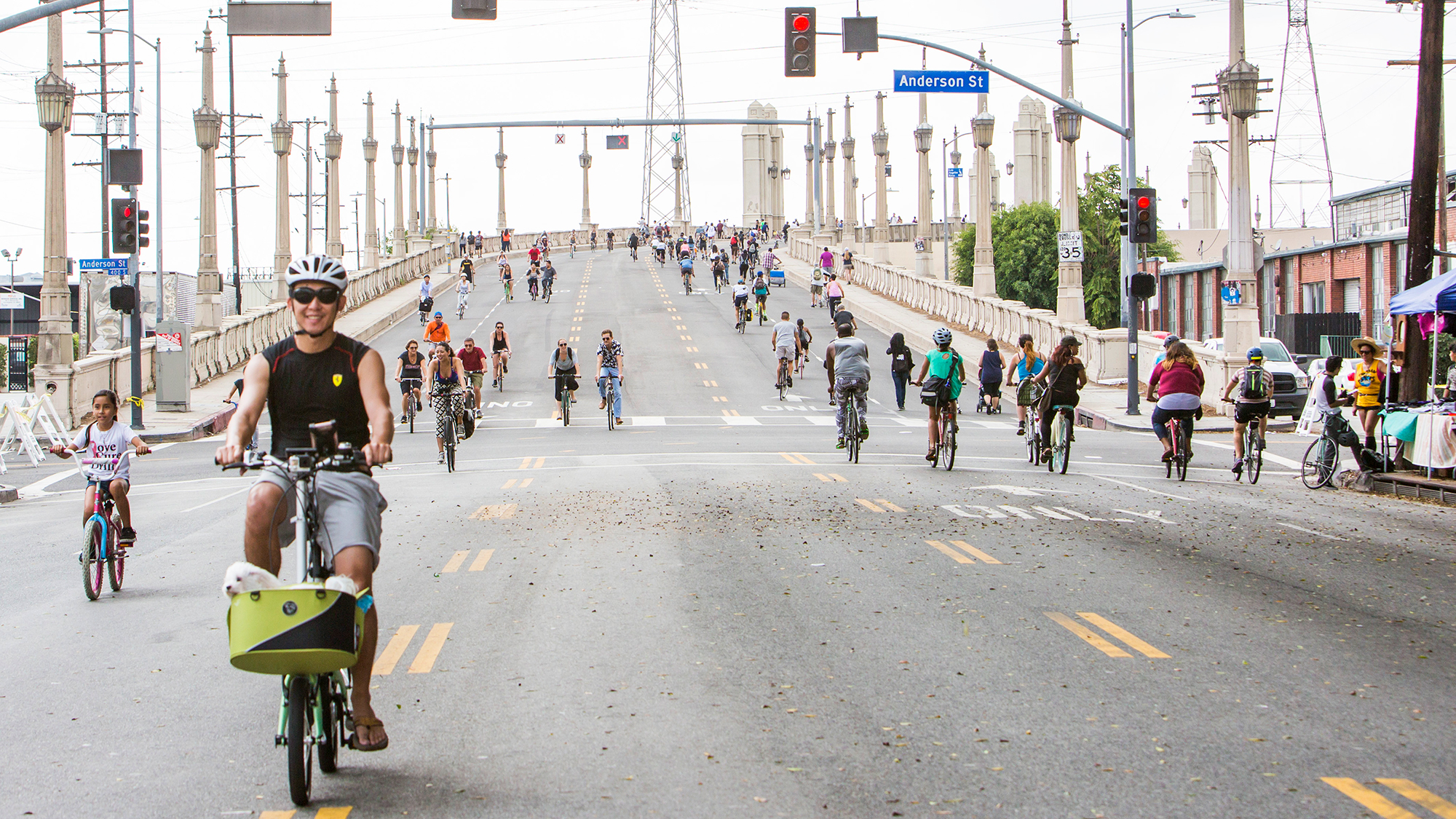 The 4th Street Bridge is another oft-used filming location, and it’s easy to see why. The art deco icon was built in 1931 and provides open views of the Los Angeles skyline.

The bridge crosses over the Metro Division 20 Station, where a widening and turnback project is being implemented to improve travel times on Metro’s Red and Purple lines. 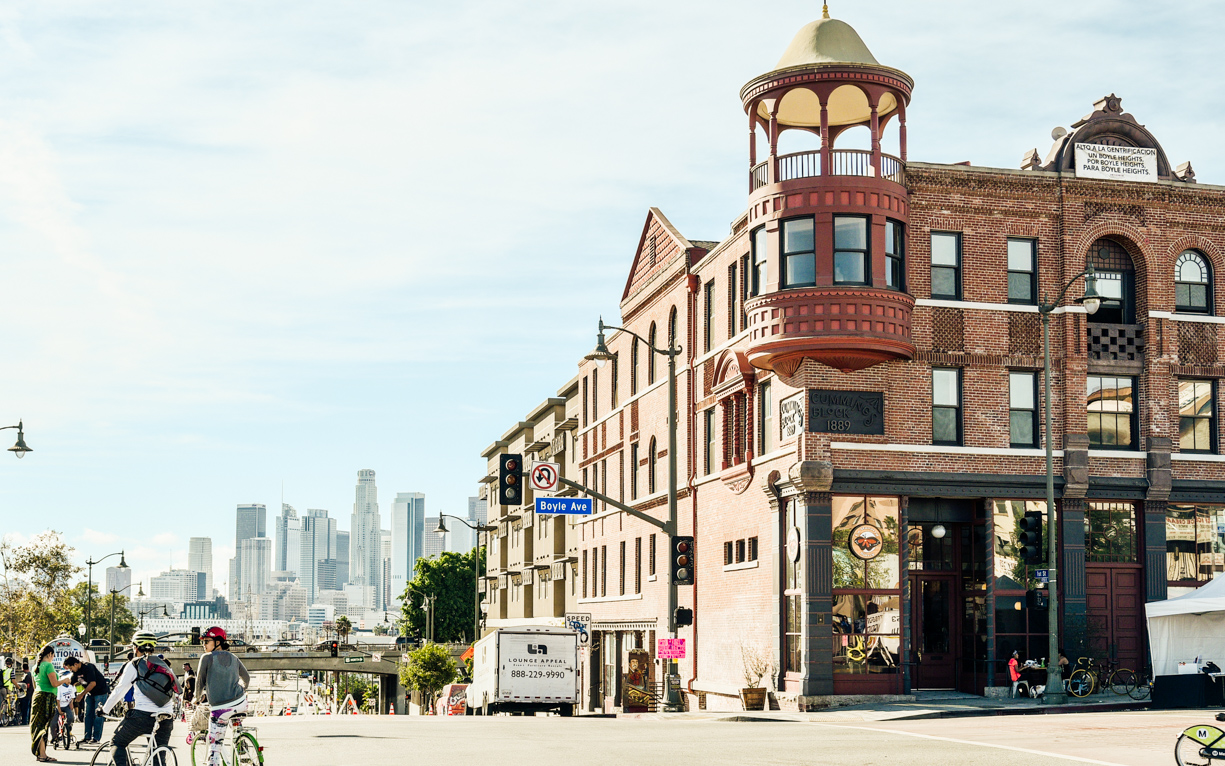 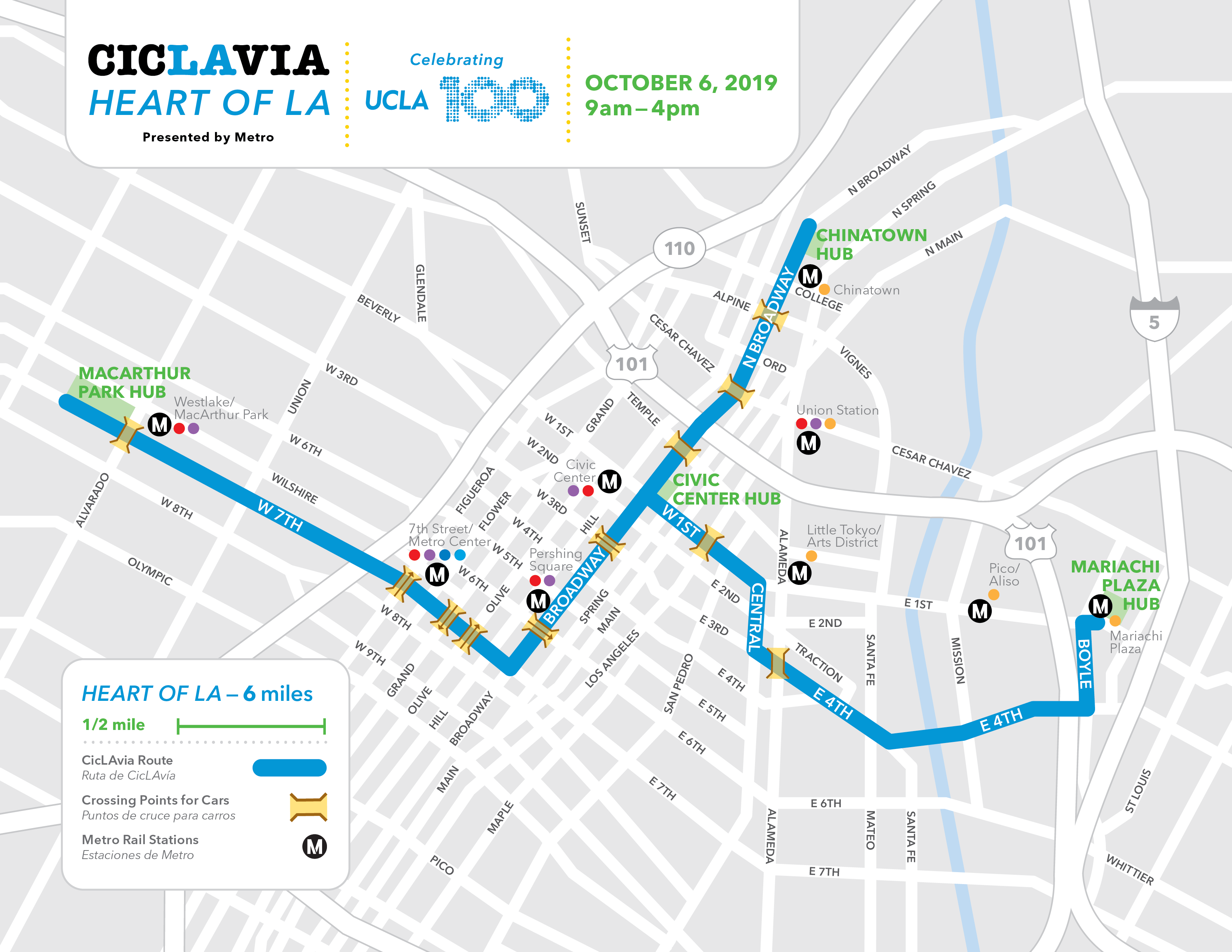 Whether this is your first time or you’re a route expert (or anywhere in between), CicLAvia—Heart of LA Celebrating UCLA100 offers sights and tucked away gems you may never have noticed before. Discover them on October 6!